Propper is proud to announce the addition of world-renowned speed shooter Jerry Miculek to the Brand Ambassador team. 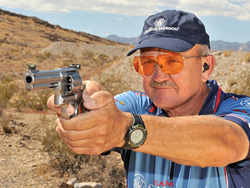 Jerry is exciting to watch and has a terrific relationship with fans. We’re excited to have him on the team.

Best known for his incredibly fast rate of fire, Miculek has been a member of Team Smith & Wesson since 1989 and has put on shooting demonstrations throughout the world. Over the years, Jerry has set several world records, including six shots, a reload, and six more shot with a revolver in under three seconds.

“Jerry brings a tremendous energy to the shooting sports,” said John Negrau, VP, Marketing & eCommerce for Propper. “He’s exciting to watch and has a terrific relationship with fans. We’re excited to have him on the team.”

During his recent visit to the Propper headquarters, Miculek commented, “I’m very impressed by the reception I received from everyone. This is going to be a great relationship. Propper’s drive to serve the military, law enforcement, and civilian enthusiasts is evident in everything they do.”

Jerry Miculek is one of the best all-around shooters on the planet. His accomplishments during his more than 30-year shooting career include 52 National titles and 45 World titles. Although best known for his amazing feats of revolver speed shooting, Jerry is also one of the top Multi-Gun competitors in the world, demonstrating equal prowess with pistols, rifles and shotguns. Jerry became a member of Team Smith & Wesson in 1989. Since that time he has participated in countless competitions, performed hundreds of shooting demonstrations, and represented Smith & Wesson and his other sponsors at store promotions and trade shows throughout the world.

Propper has made tactical gear with a purpose for over 50 years, since their first U.S. Navy contract in 1967. Today, Propper designs and manufactures professional level tactical apparel and gear for military, law enforcement and public safety professionals, and civilians, whether in the service, on the job, or off for the weekend.

For more information on Propper:
http://www.propper.com