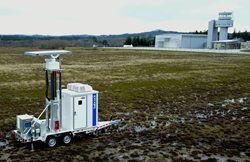 DeTect, Inc. (http://www.detect-inc.com) announced today that it has completed commissioning of a HARRIER Ground Based Sense-and-Avoid (GBSAA) radar at the Rozas Aerodrome in Lugo, Spain. The system, supplied to Babcock, España, will provide beyond visual line-of-sight (BVLOS) for drone and Unmanned Aircraft System (UAS) operations at project sites throughout Spain and Europe for wildfire assessment and firefighting support.

About DeTect. DeTect is a fully integrated radar company with US radar engineering and manufacturing facilities in Florida, and offices in California, Washington DC, Canada and England. The company is a leader in applied radar remote sensing technologies and systems for small radar cross section targets such as unmanned aerial vehicles (UAVs), drones and birds. Other DeTect products include DroneWatcher™ drone detection and defense systems, and MERLIN™ aircraft birdstrike avoidance radars and avian radars. Since 2003, DeTect has manufactured and commissioned over 280 advanced systems in the US, Canada, the UK, Europe, Africa and Asia.