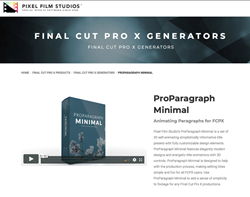 ProParagraph Minimal delivers a simplistic elegance to all informative title animation productions. Included with this product are 30 separate paragraph animations as well as helpful background presets. Each preset establishes a modern style and features minimalistic designs that can be combined with the included background presets. In conclusion, FCPX users can quickly create informative titles for any project by easily altering the text and design elements.

Provided within this product are adjustable background presets. Intuitive controls allow users to tint and blur the media to create contrast, additionally the controls include saturation customization. Blur the background to add even more depth to the look of the composition. In addition, more background animation presets that include shapes and gradients that utilize blending modes can be used for a more unique design. Using ProParagraph’s background presets allow for FCPX users to create a large variety of looks and contrast to any media production.

ProParagraph Minimal features user friendly controls that allow users to modify various elements of each unique preset. Users can then manipulate the scale, opacity and width of the title elements with a click of the mouse. In addition, editors can adjust three dimensional rotations as well as depth. With on-screen controls, ProParagraph Minimal users can easily modify the overall position, rotation, and scale of the presets.

ProParagraph Minimal is exclusive to Final Cut Pro X users. To use, simply drag and drop the desired title preset and/or background preset onto the timeline above any source media and customize accordingly. Each preset has been hand-crafted in order to be used with any type of desired media, such as videos or images. ProParagraph Minimal is entirely editable within and exclusive to Final Cut Pro X.