This year's event raised over $10 million in support of Naval Special Warfare warriors and families! 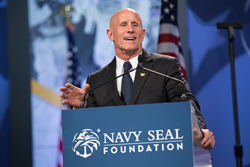 “Our warriors are indispensable to the defense of our nation. The sacrifices their families make are an indispensable part of the mission, and the Navy SEAL Foundation’s support to those families is impossible to quantify or overestimate.” -Retired Vice Admiral (SEAL) Robert S. Harward, Jr.

Over 1500 dedicated patriots and supporters gathered at the New York Marriott Marquis on the evening of April 12, 2018, for the tenth Navy SEAL Foundation New York City Benefit Dinner, a cornerstone of the organization’s fundraising efforts. This annual event recognizes the courage, commitment and sacrifice of the Naval Special Warfare (NSW) community, and this year the focus was on the daily sacrifices made by NSW families and children.

Benefit Chairman Thomas A. Wagner, co-founder of Knighthead Capital Management, and his team raised over $10 million dollars in support of the Foundation’s specialized programs. “The men who wear the Trident are an incredible array of multi-faceted individuals from every background imaginable,” said Wagner. “They risk everything from personal safety to familial stability, all for a greater cause, and they ask for little in return. We are here tonight to honor, celebrate and assist this community that does so much to protect us. I am grateful for that opportunity.”

The Navy SEAL Foundation was pleased to recognize Nancy and Howard Marks as the 2018 New York City Navy SEAL Foundation Patriot Award honorees for their steadfast support of SEALs and their families. Nancy Marks is the chairman of the New York-based luxury fashion house Sies Marjan. Howard Marks is the co-chairman and co-founder of Oaktree Capital Management, a global alternative investment firm. Retired Rear Admiral (SEAL) Alex Krongard presented the prestigious award to the gracious couple. Both Nancy and Howard Marks spoke about their experiences with members of the NSW community and the intense commitment, courage and sacrifice SEALs and their families display.

The evening’s second honoree, Sesame Workshop, was presented with the “Fire In the Gut” award by Hannah Byers, daughter of Congressional Medal of Honor recipient, Senior Chief Special Warfare Operator Edward C. Byers, Jr. This award is traditionally presented at SEAL graduation ceremonies to the candidate who demonstrates superior motivation through the arduous six-month training course. The Navy SEAL Foundation “Fire In the Gut” Award is presented to an individual or organization that displays this same quality regarding serving our military families.

Sherrie Westin, Executive Vice President of Global Impact at Sesame Workshop, accepted the award on behalf of her organization. Sesame Workshop continues to innovate and lead the charge in assisting the children of military families as they cope with stressors unique to life in the military. From dealing with separation due to deployment to strategies for dealing with a parent who is injured or even killed in the line of duty, their programs make a difference in the lives of military kids. As Ms. Westin made her remarks, the audience was surprised to see her joined on stage by the one and only, Elmo!

Rear Admiral (SEAL) Richard Rodriguez, Deputy Commander, Naval Special Warfare Command, delivered a moving tribute to the members of NSW who are no longer with us. Rachel Moore, daughter of retired Rear Admiral (SEAL) Scott P. Moore and Gold Star granddaughter, played “Taps” on the piano as the photos and names of the Fallen were scrolled.

Retired Vice Admiral (SEAL) Robert S. Harward, Jr. delivered the evening’s keynote address sharing intimate stories from his nearly 30 years of service. Harward is the Chief Executive Officer of Lockheed Martin United Arab Emirates and a national security expert with combat experience as a SEAL in Afghanistan, Iraq, Syria, Somalia, Yemen, and Bosnia. He spoke about the unseen sacrifices that our military families make on a daily basis, and he described the anguish of having to choose between the two loves of his life: his family and his service to the nation. Members of the audience were moved to tears as he shared how his children coped and how proud he was of their strength and courage.

“Our warriors are indispensable to the defense of our nation. The sacrifices their families make are an indispensable part of the mission, and the Navy SEAL Foundation’s support to those families is impossible to quantify or overestimate,” said Harward before thanking the audience for their support.

U.S. Navy SEALs have been in sustained combat for over 17 years, performing hazardous work in unforgiving environments at an unrelenting pace. SEALs are currently deployed in over 30+ countries across the globe and can spend up to 270 days each year in harm's way. The Navy SEAL Foundation stands behind these warriors and their families by providing a comprehensive set of programs specifically designed to improve health and welfare, build and enhance resiliency, empower and educate families and provide critical support during times of illness, injury or loss.

Like the community it serves, the Navy SEAL Foundation is a high performing organization committed to excellence. NSF has received seven consecutive 4-Star ratings from Charity Navigator. It is one of only 66 charities from among more than 9,000 to have earned a perfect score of 100 for our financial health, accountability, and transparency, placing NSF in the top 1% of the rated charities. Ninety-four cents of every dollar donated goes directly to programs or is retained for future mission use.