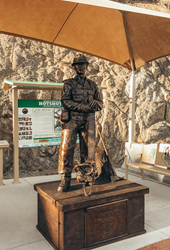 On June 30, 2013, the Granite Mountain Hotshot firefighter crew went out to fight the Yarnell Hill Fire. Nineteen members of the Granite Mountain Hotshots perished in the fire due to being trapped in a canyon in the area. This was the greatest loss of a group of firefighters since 9/11, and is a devastating tragedy. The deaths of these men were due to the hand-me-down equipment that the Granite Mountain Hotshots used, as well as the lack of education and awareness that was provided to these firefighters. To prevent this from happening ever again, two women came together and created the Wildland Firefighter Guardian Institute. Deborah Pfingston, who lost her son in the incident, and Roxanne Preston, who lost her husband, wanted to provide a way for these wildland firefighters to receive the proper equipment and education that they need in order to be prepared for the intense brutality that is their career. Their mission, is that "Wildland Firefighter safety is of the utmost importance to our organization. We will champion firefighter safety through independent investigations, education, and real life support for firefighters, families, and the fire community. Truth-Transparency-Accountability- Change, the future for wildland firefighter safety is now."

The Granite Mountain Hotshot Memorial State Park was the first memorial state park in Arizona, and is located around the area of the Yarnell Hill Fire. There is a trail that goes along the memorial park that is 7 miles roundtrip. The people who cannot hike the trail needed a way to honor and memorialize the 19 fallen firefighters at the trailhead. That is where Big Statues came in.

Mike Rowe and his team at Returning the Favor, a Facebook series that gives back to organizations such as the Wildland Firefighter Guardian Institute, came in and wanted to create an episode featuring the organization that Deborah and Roxanne created. In addition, they inquired of Big Statues to create a bronze statue that would capture all 19 firefighters and would accurately portray and honor each of them for their service. The statue was revealed during the filming of the episode, and the statue will continue to inspire its viewers as well as honor the 19 fallen firefighters for hundreds of years to come.

To find out more about the Wildland Firefighter Guardian Institute and how you can help raise awareness, visit their website at http://www.wfgi.org