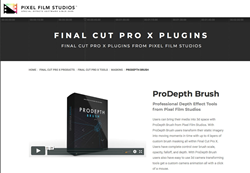 With ProDepth Brush 3D camera control users have simple and easy to use camera transforming on-screen controls. Creating a custom camera animation has never been so fun and easy to do. Users have control over camera position, 3D rotation, and camera dolly within Final Cut Pro X.

ProDepth Brush was professionally designed to work seamlessly inside of Final Cut Pro X. As an effect ProDepth Brush can be dragged and dropped onto media and previewed in real time. With the published parameters found in the FCPX inspector, users have the ability to revolutionize static imagery with spectacular 3D depth!