One of the most influential exports of the Tennessee River Valley is Appalachian music and the musicians who influenced today’s music genres of Bluegrass, Country, Americana, Folk, Rock and Roll, Jazz, Blues, and Pop. Exploring the music heritage of the region is best experienced through the festivals, theaters, and historic studios that were the creative venues for this music revolution. 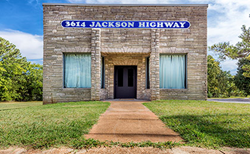 A visit to Muscle Shoals is an immersion in music history, culture and innovation cultivated from a rich diversity of people and place.

You don’t have to travel very far in the Tennessee River Valley to understand that this is a place that revers its music and musical heritage. The region is linked by state music trails such as the Crooked Trail in Southwest Virginia and the American Music Triangle which features the legendary studios of Muscle Shoals, AL. One of the most influential exports of the Tennessee River Valley is Appalachian music and the musicians who influenced the modern music genres of Bluegrass, Country, Americana, Folk, Rock and Roll, Jazz, Blues, and Pop. Exploring the music heritage of the region is best experienced through the festivals, theaters, and historic studios that were the creative venues for this music evolution.

The history of Appalachian music begins with people. Native Americans used music to preserve stories and to celebrate their cultural traditions. As the settlers moved into the Valley, they also brought their instruments and songs. Traditional “hill” music blended the ballads, hymns, fiddle tunes and blues of the European, Scot- Irish, Black Dutch, and African Slaves who settled the region. Appalachian music instruments also reflected these people who now called the Valley home. The fiddle, dulcimer, guitar, and African banjo blended together to create the sound that is Appalachian Music. As this sound was heard beyond the hollers of the region at festivals, settler schools, and from early studio recordings such as the famous Bristol Recordings of 1927, the world sat up and listened.

Here are 5 must stops to learn about the heritage of Appalachian music in the Tennessee River Valley:

The rugged highlands of East Tennessee have a reputation for fast cars, illegal stills, and legendary country music. Follow the White Lightning driving trail as it takes you through the hills and valleys that produced legendary musicians- Dolly Parton, Chet Atkins, Jimmy Martin, and Roy Acuff. Don’t miss a mid-day music performance broadcast live world-wide at the WDVX studios in Knoxville. Stroll the city streets following the Cradle of Country Music Trail. Knoxville has a rich history of promoting young talent and that continues today. On every corner, you will discover a place or a venue that is featuring live music.

Down river in Chattanooga, the Bessie Smith Cultural Center is a tribute to the classic Blues and Jazz movement that was evolving in the late 1920s. The “Empress of Blues”, Bessie Smith’s talent led to enormous popular appeal for the emerging mass radio broadcast technology and for the niche marketing of recordings. Nearby is the Historic Tivoli Theatre which was built to host both live performances and the silent movies of the 1920s. In 1926, the Tivoli became the first theater in the nation to have “air conditioning” installed. Today, the Tivoli offers a wide variety of performances from blues to bluegrass and classical to country; plus dance, opera and Broadway shows.

The “Singing River” appellation for the Tennessee River is often ascribed to the lore surrounding the flowing water and to the sounds that flowed from the studios of Muscle Shoals. The Yuchie Tribe called the Tennessee the “singing river” as the water sounded like a woman singing. Alternatively, legend has it that a young native girl sang as she fetched water, and her voice carried far down river in the 20 mile shallow canyon. What is known is that this area of the Tennessee River has been a source of distinctive music named the Muscle Shoals Sound. A visit to Muscle Shoals is an immersion in music history, culture and innovation cultivated from a rich diversity of people and place. Muscle Shoals Sound Studio, with its quartet of session musicians affectionately called the “swampers,” was a much sought-after recording location for some of the world's best-known musical acts including Mick Jagger, Aretha Franklin, Wilson Pickett, Willie Nelson, Percy Sledge, Rod Stewart, Bob Seger and Lynyrd Skynyrd. The Rolling Stones recorded "Brown Sugar" and "Wild Horses" here for their "Sticky Fingers" album. In nearby Sheffield, the Cypress Moon Studios is the former location of the second Muscle Shoals Sound Studio from 1978 to 2005 where such artists as Bob Dylan, Etta James, The Commodores, , Percy Sledge, Melissa Etheridge, Jimmy Buffett and hundreds of others recorded. Both locations have scheduled hours open to the public.

Embracing the diversity of music and people living in the Tennessee River Valley, the Shoals area annually pays to tribute to native son, W. C. Handy. Known as the “Father of Blues”, Handy gifted the world with the sounds of rhythm-and-blues, jazz, and soul with famous tunes such as “St. Louis Blues,” “Memphis Blues,” and “Beale Street Blues”. Every July, live performances of Jazz and Blues music can be heard throughout the Shoals at local eateries, malls, parks and other establishments. The event runs 10 days, offering visitors over 200 performances to choose from.

As the Tennessee River turns northward, the sprawling Loretta Lynn Ranch is a popular destination for visitors interested in the legacy of the “Coal Miner’s daughter’s history and famed career. Her talent for songwriting comes from personal storytelling and societal themes that were not generally discussed in polite company. The Ranch hosts events throughout the year including the annual Labor Day weekend Gospel Fest. The onsite campground and horse trails provide guests additional activities to enjoy while listening to some great music.

Learn more by exploring the Tennessee River Valley Geotourism MapGuide and find out what makes this region a National Geographic Destination. With the interactive travel map, you can save trip ideas and create your own trip plans to see places around the region. It's time for you to share your stories and start some new ones!