When Hollywood said the female character was too strong, too blunt, and Hollywood executives did not like the character, Matthew turned his TV series idea into this award winning novel and this apocalyptic Sci-Fi thriller is proving Hollywood wrong. 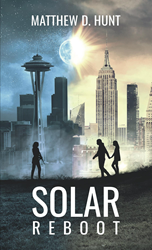 Matthew's debut novel, Solar Reboot, has just won a Bronze IPPY award for Science Fiction. Four years ago, the novel was originally a spec idea for a TV series, but after getting negative responses such as “female character is too strong, people won’t like her,” and “the male character isn’t strong enough…” Matthew was informed that if he were to make the female character softer and more vulnerable, and the male character more “macho” and stronger, that executives would find the story more appealing. Matthew refused to make those changes and decided to turn the spec idea into the book it is now, in the belief that people want more realistic, less stereotypical characters.

Matthew's resulting novel has many 5 star reviews and a glowing review from Kirkus. Solar Reboot was a featured Indie book in the March 1st 2018 Kirkus Review Magazine; with this latest award it has proven itself a winner and a must-read novel.

Matthew started his entertainment career not as an author, but as a filmmaker and producer. Matthew has also just been nominated for a 2018 NW Regional Emmy. You can see his film history on IMDb under Matthew D. Hunt.