Study examines who is giving reactively, key motivations, and what nonprofit organizations need to know 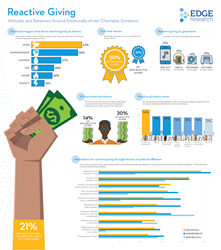 Edge Research, a premier marketing research firm servicing nonprofits, associations, and corporations, today announced findings from a study on Reactive Giving: Understanding the Surge in Cause-Related Giving. The study explores the phenomenon of reactive giving, who reactive givers are, and why they are giving across different generations and political affiliations.

“Today’s political and social climate are helping drive younger and first-time donors to give to charitable and cause-related organizations,” said Lisa Dropkin, Principal at Edge Research. “While rage or anger trigger some reactive giving, our data illustrate that hope and empowerment are often the underlying cause for a donation.”

“Reactive donors are looking to make a difference with their charitable contributions, especially around issues of social justice and equality,” said Pam Loeb, Principal at Edge Research. “It’s incumbent upon nonprofit organizations to engage these younger and first-time donors to show their investments are making an impact.”

The full study can be downloaded at: http://www.edgeresearch.com/reactive-giving/

About the Study
Edge Research conducted an online survey of 895 U.S. donors. A non-probability sample of adults aged 18+ was drawn from a national survey panel of over two million households. The sample was controlled to be U.S. Census representative, and qualifying participants reported that they had made a monetary donation to at least one nonprofit organization/charitable cause within the last 12 months (excluding children’s school, alma mater, and place of worship). Data were collected December 5-30, 2017.

About Edge Research
Edge Research is a premier marketing research firm servicing nonprofits, associations, and corporations. Over the past 20 years Edge has helped many nonprofits move to a donor-centric mindset. Research insights guide clients on how to communicate with their audiences more effectively, retain and grow their donor base, and make the changes needed to cultivate the next generation of supporters. For more information, please visit http://www.edgeresearch.com.