SLCC Back with Support for Twilight Concert Series

SLCC finds "innovative" way with the series to be involved in the community, featuring local and national musical acts. 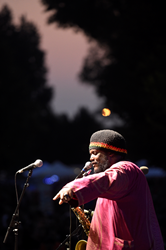 This is a fantastic opportunity for the College to once again support one of the summer concert season’s most popular events in a community that wants quality, affordable, live performances.

Salt Lake Community College this summer is joining the Salt Lake City Arts Council and Broadway Media as the presenter of the 2018 Twilight Concert Series, held each year in downtown Salt Lake City. This year’s lineup will be announced later this spring.

The Arts Council fully supports SLCC’s vision to be a model for inclusive and transformative education and strengthening the communities served through the success of its students. With collaboration, community and inclusivity among the school’s core values, the Arts Council is pleased to bridge the gap between arts and education and have SLCC on board for its second year as title sponsor.

“This is a fantastic opportunity for the College to once again support one of the summer concert season’s most popular events in a community that wants quality, affordable, live performances,” said SLCC Public Relations Director, Joy Tlou. “Many Twilight Concert Series attendees have been or will be students at SLCC – we saw some of our own students at those concerts last year. We found that our involvement with the series represents one of the new and innovative ways we’re looking for to further be involved in the community that has a lasting, meaningful impact in people’s lives. The fact that we’re doing this a second time is further proof that SLCC is truly your community college.”

One of the highlights of summer in Salt Lake City, the series will be held in August and September on Thursday evenings, consisting of five concerts. The concerts are moving back to Gallivan Center in downtown Salt Lake City and will each feature one national act and at least one local act. Tickets will be $10 for general admission.

The Salt Lake City Arts Council was founded in the late 1970’s and was created to ensure that the community established a local arts organization to provide public programming and support for the arts. The mission of the Arts Council is to promote, present and support artists, art organizations, and arts activities in order to further the development of the arts community and to benefit the public by expanding awareness, access and participation.

Based in Salt Lake City, Broadway Media, is a multi-station cluster, which includes KXRK, KUDD, KUUU, KYMV, KEGA and KALL. Formed in 2014 by owner, Dell Loy Hansen, who has strong affiliations in the Salt Lake Community with several successful businesses and ventures including; Wasatch Properties, and Utah’s Major League Soccer team ReAL Salt Lake, Broadway Media has continued to be a market leader in Salt Lake Radio.

The Roots perform during the 2017 Twilight Concert Series in Salt Lake City.