“The Vanishing Path”, from Christian Faith Publishing author Gary Gray, is the story of two young children and their unexpected adventure. After the mystery path they discover suddenly disappears, Alex and Abby are lost, but they will find their way thanks to their new friends. 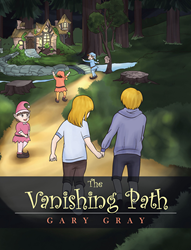 “The story of the ‘The Vanishing Path’ came to me, a grandfather of eighty years, while I was in the back of a van with four of my grandchildren. Trevor was on my left, Nieva on my right, Joe up to the right, and Daniel next to Joe on the left. My daughter Glory and her husband Jacob were up front. Trevor asked me to tell them a story. We had about an hour and a half of travel time ahead of us. I just started with two children playing ball in the backyard, and the rest just came to me,” said Gary Gray

Published by Christian Faith Publishing, Gary Gray’s new book is the adventure of two children who get lost.

A young boy named Alex and his sister Abby discover a new path while playing in their backyard. The path leads to a giant tree. Tired, they decide to take a nap. When they wake up, it is dark and the path is gone. They are lost. Suddenly, three elves appear and offer to help them. Off they go on another unexpected adventure.

View a synopsis of “The Vanishing Path” on YouTube.

Consumers can purchase “The Vanishing Path” at traditional brick & mortar bookstores, or online at Amazon.com, Apple iTunes store, or Barnes and Noble.

For additional information or inquiries about “The Vanishing Path”, contact the Christian Faith Publishing media department at 866-554-0919.