Jaydine Rendall’s Newly Released “High Plains Heroes: Laughing Wolf” Is A Delightful Book About The Adventures Of Laughing Wolf In The Mountains And Plains

“High Plains Heroes: Laughing Wolf” from Christian Faith Publishing author Jaydine Rendall is an adventure-packed story about Laughing Wolf’s journey in bringing his injured brother to a skilled healer and being reunited with the Sullivan family after a dangerous journey in the mountains. 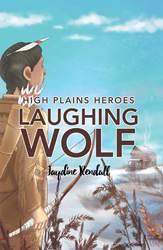 Jaydine shares, “The smell of blood clogged Laughing Wolf’s nostrils. The Utes made multiple passes through the camp, trampling anyone underfoot and firing at anything that moved. Arapaho women gathered the young children and ran to the safety of the trees and boulders around the lake. Laughing Wolf hunched down behind a boulder and fired arrow after arrow. He watched his brothers grab at the legs of Ute warriors and try to pull them off their horses. Finally, White Owl was successful in dragging a Ute to the ground. The Ute immediately jumped up and came at White Owl with a knife. Laughing Wolf ’s heart was hammering. He couldn’t get a clear shot at the Ute. The men were moving too quickly, circling each other and feinting with their knives. Laughing Wolf came out from behind his rock and took aim at the Ute warrior. He prayed his arrow would be straight and true and that White Owl would be victorious. Just as Laughing Wolf was about to release the arrow, he glanced to his right and saw a Ute warrior charging down on him. The warrior held a club loosely in his hand, and it was swinging directly at Laughing Wolf ’s head.”

Published by Christian Faith Publishing, Jaydine Rendall’s new book is an exciting story about Laughing Wolf’s first successful hunt and the vicious raid by Ute warriors that has gravely injured his brother, narrating the hunter’s challenging journey to bring his brother to a healer as well as his stay on a family’s homestead as winter settles in.

Laughing Wolf realizes also how different Arapaho Indians are from the settlers. This book is also historically accurate, making the learning experience on history more fun for young readers.