Fifthsun.com is buzzing with excitement to launch officially licensed Marvel Ant-Man and the Wasp apparel. 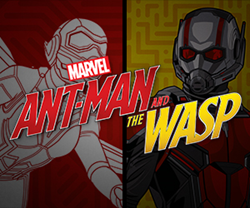 Ant-Man and the Wasp takes my love of the Marvel Cinematic Universe to a whole new size.

Get ready to partner with Ant-Man, the Wasp, and Fifth Sun for new Marvel Ant-Man and the Wasp designs. Fifth Sun is eager to introduce select designs today, April 20th, 2018, on the first day Ant-Man merchandise is available to the Fifthsun.com community for purchase.

Hank Pym has been working to upgrade the Wasp suit (and, yes, Ant-Man is feeling a little jealous about it) with blasters, wings, and awesome high-tech gadgets; while Fifth Sun has been working to upgrade their Marvel offerings with fun new Ant-Man and the Wasp styles. The new officially licensed designs include classic logo tees, Wasp designs, and styles with your favorite fun-sized hero, Ant-Man, as well. 5SUN loves adding new designs from popular brands, films, and t.v. shows and is especially excited about the opportunity to share the Marvel Universe with its community of fans.

Fifth Sun’s Customer Service Lead, Marie Murray, has been waiting to see the new Ant-Man film since she saw the first trailer. She confesses, “Ant-Man and the Wasp takes my love of the Marvel Cinematic Universe to a whole new size.” Join in on 5SUN’s excitement for the film premiere on July 6th, 2018 with an exclusive Ant-Man shirt available for the first time today.

Marvel’s cinematic universe – as we know it and love it – started with the first Iron Man film in 2008 and has been followed by a long line of blockbuster hit after blockbuster hit like Thor: Ragnarok, Black Panther, and the exciting Avengers: Infinity War premiere in April 2018. Beloved characters like Captain America, Hulk, Spider-Man, and the Guardians of the Galaxy continue to inspire comic-book fans across the globe with new adventures and world-saving feats portrayed by the popular Marvel film franchise.

About Ant-Man and the Wasp:

Scott Lang dons his Ant-Man suit again to join Hank Pym and his daughter, Hope Van Dyne, on a mission to uncover secrets and defeat the mysterious villain, Ghost. Ant-Man must learn to balance his role as a father with that of a superhero, while also trying out the new “Giant-Man” role, getting a new partner, the Wasp, and keeping audiences laughing. Get ready to watch Ant-Man in action, or escaping giant flying Pez, at the film premiere on July 6th, 2018.