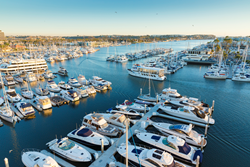 “Marina del Rey is not only a beautiful place to live, it’s an incredible place to visit,” says Janice Hahn, Los Angeles County’s Fourth District Supervisor. “This survey shows, despite multiple projects under construction, that the Marina continues to be a place that attracts tourists from around t

One of the most desirable destinations along the Los Angeles coast, Marina del Rey (visitmarinadelrey.com) continues to see a substantial benefit from a modernizing renaissance, which is driving increased tourism numbers and related economic impact. Over the course of 2017, the Marina del Rey Convention & Visitors Bureau conducted a survey of incoming visitors and collected data for its annual report on the economic impact that tourism has on Marina del Rey.

Why Visitors Love Marina del Rey
The Marina del Rey Convention & Visitors Bureau commissioned Destination Analysts to conduct its first-ever visitor profile and destination brand perception study throughout 2017. Directed at surveying visitors’ trip behaviors and activities, the study determined key data such as purpose of trip, personal impressions of the Marina, transportation methods used in market, activities participated in, trip-planning methods used, and other Los Angeles area destinations visited as part of the same trip. The research shared overwhelmingly positive reviews with 93.8 percent of visitors expressing they were “likely” or “very likely” to return to Marina del Rey and 89.4 percent revealing they booked their trip to Marina del Rey for the accessibility to the beach. Other data gathered highlighted the top three reasons for booking a trip to Marina del Rey included a vacation, a weekend getaway, and business travel and most visit the Marina with a spouse or significant other.

“Marina del Rey is not only a beautiful place to live, it’s an incredible place to visit,” says Janice Hahn, Los Angeles County’s Fourth District Supervisor. “This survey shows, despite multiple projects under construction, that the Marina continues to be a place that attracts tourists from around the world to eat, play, and shop.”

“Marina del Rey is an urban waterfront playground that offers tourists resort-like amenities, exceptional hotel accommodations, and dining experiences with breathtaking Marina views,” says Janet Zaldua, CEO of the Marina del Rey Convention & Visitors Bureau. “The positive feedback from our 2017 visitors survey underscores the significance of our local tourism and hospitality businesses that help position Marina del Rey as a premier leisure destination in Southern California. Our economic impact study emphasizes the value that tourism brings to the community of Marina del Rey and to Los Angeles County as a whole.”

Where the Money Goes: Tourism Dollars Benefit Visitors and Locals Alike
Transient Occupancy Tax (TOT), commonly known as hotel tax, collected from the six hotels that fall within the Marina boundary partially funds visitor-serving events, attractions, and programs, all of which benefit local residents as well. The initial $700,000 in TOT revenue goes to the L.A. County General Fund. Any hotel tax over $700,000 is allocated to the Department of Beaches and Harbors to use specifically for visitor-serving projects in Marina del Rey. In 2017, that amount totaled $3.4 million, and it funded events and programs including:

The Marina’s Continued Evolution
The future of Marina del Rey will include more excitement and growth from both County infrastructure improvements and private enterprises. Here are a few recently completed projects, plus others coming soon.

The public can charter sailboats - with or without a skipper - for a leisure cruise up the Los Angeles coast.sunset sailboat