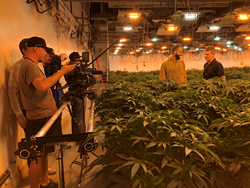 Quddus and "Cannabiz" on location at Gardens of We Eden

With cannabis now legal in the world’s sixth largest economy and other regions following suit, we are at ground zero in a truly exciting time for innovators of this ‘budding’ business. "Cannabiz" looks at some of the industry’s break-out companies and the incredible minds behind them.

To watch 420TV, please visit https://420tv.com/ or download the 420TV App from iTunes media player or the Google Play Store.

With five episodes debuting on 4/20 and another five episodes to follow, “Cannabiz” delves into the stories behind the canna-billionaires of tomorrow, taking a deeper look into the pioneers of the recreational and medical marijuana industry. Each episode is dedicated to a company that is making a unique mark and impact on the surging cannabis business. Quddus, an entrepreneur himself who initially rose to international stardom as a host on MTV’s hit show “TRL,” explores how each cannabis start-up found its success and what the future holds in a rapidly changing social and political landscape.

Among the “Cannabiz” series highlights – shot in several locations across the U.S. in 4K – is the compelling mission of three U.S. military veterans whose business is helping their fellow vets avoid the addicting opioids they are commonly prescribed by giving them vital access to medical cannabis; a behind-the-scenes visit with a “sauce pen” creator whose specialized technique is a game-changer for vaping; and the cannabis industry’s own “shark tank” incubator – a startup for startups hoping to set the business of weed ablaze.

“With cannabis now legal in the world’s sixth largest economy and other regions following suit, we are at ground zero in a truly exciting time for innovators of this ‘budding’ business,” said Alex Nahai, a founding 420TV partner. “‘Cannabiz’ – and host Quddus – gives viewers a captivating look at some of the cannabis industry’s break-out companies and the incredible minds behind them.”

Over the next 10 years, consumers are expected to spend $57 billion on legal cannabis worldwide, according to a study by Arcview Market Research and its partner, BDS Analytics.

“Cannabiz” joins a 420TV lineup that also includes such originally produced 420TV series in 4K as “In Amsterdam” and “Medical Marijuana Miracles.”

About 420TV
420TV is a video-on-demand entertainment and lifestyle network devoted to original programming, news and other content for, and about, the worldwide cannabis phenomenon. Available through 420TV.com and its iOS and Android mobile applications, 420TV delivers original programming produced exclusively for the multi-platform channel as well as acquired long- and short-form entertainment. Content categories include news, information, food, fashion, comedy, music and animation, as well as acquired feature films, documentaries, music and live streaming events. 420TV was developed by OWNZONES Media Network, Genesis Media and Alex Nahai Enterprises. For more information, please visit https://420tv.com/.