Veran Medical has received CE Mark clearance for its next generation ENB SPiN Thoracic Navigation System™ for lung cancer. The approval clears the way for Veran to accelerate commercialization efforts of its newest platform for lung specialists across Europe. 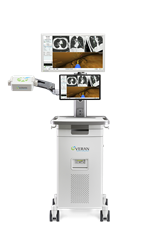 “We are thrilled to provide physicians and patients in Europe and across the globe with access to this break-through care solution for lung cancer,” said Veran Medical CEO Jason Pesterfield.

“We are thrilled to provide physicians and patients in Europe and across the globe with access to this break-through care solution for lung cancer,” said Veran Medical CEO Jason Pesterfield. “At Veran, our mission is to provide physicians with the tools to access, sample and guide treatment of the smallest suspected cancer nodules so—together, we can stage shift lung cancer.”

Lung cancer kills an estimated 1.6 million people a year worldwide. In Europe alone in 2017, it’s estimated that lung cancer killed 275,000 men and women. New lung cancer screening is helping identify patients earlier in the disease progression and has been proven to save lives.

Bronchoscopy is commonly used for the diagnosis of suspicious pulmonary nodules discovered on computed tomographic (CT) imaging of the chest. However, multiple clinical trials have documented that traditional tools are failing physicians. In the large multi-center AQuIRE registry, diagnostic yields were as low as 38.5%. Results presented at the American College of Chest Physician 2017 meeting in Toronto from a randomized clinical trial pitting Radial Endobronchial Ultrasound (R-EBUS) vs. standard bronchoscopy with fluoroscopic guidance, diagnostic yields were 48.7% and 26.8%, respectively.

Another challenge lung specialists face is that approximately 40% of lung nodules lie outside of an airway, making them very difficult to reach endobronchially, and traditionally requiring an additional procedure. Veran’s SPiN Thoracic Navigation System™ is the first and only FDA cleared technology that enables Pulmonologists or Thoracic Surgeons to safely and accurately access lung nodules outside of an airway using SPiN Perc™, a navigated transthoracic needle. With SPiN Perc™, Veran combines endobronchial navigation with percutaneous navigation, allowing physicians to access all lung nodules in a single procedure, regardless of nodule size or location. This eliminates the cost and risk of unnecessary procedures and empowers physicians to provide a same day diagnosis for their patients. The early diagnosis and treatment of lung cancer has been proven to save lives.