This weekend, at Richmond Raceway in Richmond, VA, Team Fastrax™ will be performing patriotic American Flag skydives as part of the opening ceremonies of the ToyotaCare 250 NASCAR Xfinity Series race and the Toyota Owners 400 NASCAR Monster Energy Sprint Cup race. 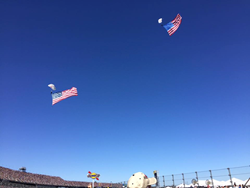 Starting Friday, April 20, 2018, at what is surely an exciting weekend for Richmond race fans, Team Fastrax™ will perform special patriotic demonstrations at both the ToyotaCare 250 and Toyota Owners 400 NASCAR Races.

To start each race, Team Fastrax™ will execute a perfectly coordinated aerial demonstration, by skydiving in during the National Anthem with their 2,000 sq. ft. American Flag, a 1,000 sq. ft. Richmond Raceway flag and a red white and blue streamer.

“We are honored to be performing our patriotic American Flag skydive during such an exciting weekend at Richmond Raceway,” commented John Hart, owner of Start Skydiving, and Founder of Team Fastrax™. “The NASCAR Cup Series and Xfinity races are very competitive and we couldn’t be more excited to be a part of it.”

According to the Richmond Raceway site, fans will also be treated to the music of bluegrass, Virginia-based band, The Whiskey Rebellion, as they headline the fan-favorite Rolling Campground Concert in the GEICO Campgrounds. The band will also perform at Virginia Credit Union LIVE! prior to the start of the Monster Energy NASCAR Cup Series Driver/Crew Chief Meeting, which is open to all fans with a Toyota Owners 400 race ticket.

For more information on the race, or to purchase tickets, visit the Richmond Raceway website.