Donna McElroy and Kevin Connelly’s new book “Blood on the Tracks” is a bloodcurdling tale of the fruitful romance between a vampire and a human.

Recent release “Blood on the Tracks” from Page Publishing authors Donna McElroy and Kevin Connelly is an intriguing story about two individuals—a young woman and a “mysterious” stranger who turns out to be a vampire. 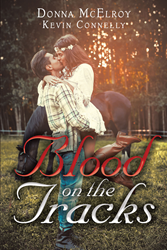 Donna McElroy and Kevin Connelly, a loving husband and wife team, have completed their new book “Blood on the Tracks”: a gripping novel about Elaine, a promising college graduate, who finds herself in a precarious situation following her shared connection with a vampire.

Authors McElroy and Connelly reveal that not all that is upfront are what they truly seem to be: “Green vines grew over everything as though the office were being reclaimed by the jungle. The psychiatrist studied her from his chair. She knew his hair to be jet-black, but today it was covered by a dark-brown turban, wrapped in the style of the Sikh faith. He was lecturing on the concept of political assassination as a form of suicide, careful to expose his gleaming white teeth and his blood red eyes. As she expressed concern, he tried to calm her by clarifying that suicide by political assassination was, in fact, his own preferred method of demise.”

Readers who wish to experience this beguiling work can purchase“Blood on the Tracks” at bookstores everywhere, or online at the Apple iTunes store, Amazon, Google Play, or Barnes and Noble.