“Our Journey Through Shattered Faith” from Christian Faith Publishing author Mike Newton details the story of a man whose world was shattered when one personal tragedy after another struck. As he recounts his struggle to heal his heart and faith, author Mike Newton hopes to show those facing the same struggles that God is always there. 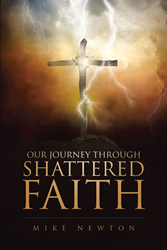 “Our Journey Through Shattered Faith”: the story of a man whose life, heart, and faith were shattered by tragedy then mended by the ever-present, ever-loving God. “Our Journey Through Shattered Faith” is the creation of published author, Mike Newton. Mike is a happily married husband, father of six beautiful children, including one son and five daughters, and a grandfather to thirteen. He was the middle child in a family of five children. He grew up in a small community in Central South Dakota where he was self-employed for over fifty years. Mike finished college to become a teacher, but only did that for a year before going into business for himself. He and his wife Donna Jean owned a successful insurance agency, which touched thousands of lives. He was also a school board member, city council member, mayor, and bank board director for several years. Mike was baptized into the Christian faith then later ordained as an elder. He has given sermons in several churches. Mike and his wife, sometimes accompanied by their family, have been able to travel the world. They have visited every State of the US and over forty countries. He has always believed traveling is a great educational opportunity. Mike is always willing to help others whenever there is a need.

“I hope from this book, people will see the root cause and the remedy for their future. I also wrote it to show people that God is the same today, tomorrow, and in the future. We tend to lose track of ourselves after unimaginable losses. This book took rivers of tears and didn’t come together without the lessons that were taught to me and remembered from my deceased children.” --Mike Newton

Published by Christian Faith Publishing, Mike Newton’s new book details his journey back to his faith.

In the early morning following his daughter’s death, author Mike Newton began writing about his feelings. He had no idea what his future might hold or how he could even carry on. Ten-thousand-two-hundred-twenty days after his daughter’s death, as well as a number of other personal tragedies, he decided to finish his book. Knowing countless other families also face the same struggles, he decided he could help others cope with their suffering by sharing his story.

Mike Newton was bitter after he lost two children, experienced the near death of a granddaughter, witnessed his grandson’s struggles with seizures, and lost two friends when they murdered their wives. Mike Newton lost his faith in God for several years. Ultimately, he decided to put his feelings and emotions in print, because he hoped to show others that God is always there with them. He hopes people will see that a shattered heart and mind can be healed. The past will never be forgotten, but the future will be brighter.

View a synopsis of “Our Journey Through Shattered Faith” on YouTube.

Consumers can purchase “Our Journey Through Shattered Faith” at traditional brick & mortar bookstores, or online at Amazon.com, Apple iTunes store, or Barnes and Noble.

For additional information or inquiries about “Our Journey Through Shattered Faith”, contact the Christian Faith Publishing media department at 866-554-0919.