Author Jimmy Reed’s newly released “One Hundred By Five Hundred” shares stories from the youth of the author and his childhood home.

“One Hundred By Five Hundred” from Christian Faith Publishing author Jimmy Reed is a collection of stories illustrating life on a cotton farm in the Mississippi Delta. As young Jimmy Reed experienced the richness of his home, he was guided by the wisdom of his mentor and friend, Jaybird. 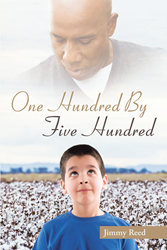 ‘I met Jaybird when I was ten years old. It was 1953, the year my father bought Dunleith Farms and Gin, near Leland, Mississippi. Soon I learned that he possessed a plethora of charismatic assets. Perhaps his most noticeable physical feature was the appealing combination of healthy, weathered, ebony skin, and a crooked smile of straight white teeth. Dad, whom everyone called Boss (probably because he was a mountain of a man with a seasoned gladiator’s hardened visage), told Jaybird, who had lived on the sprawling cotton plantation all his life, to take care of me and teach me to work, admonishing him that I was “a curious lad, full of mischief and prone to get in trouble.”’ --Jimmy Reed

Published by Christian Faith Publishing, Reed’s new book is a collection of stories about life in the Mississippi Delta.

Jimmy Reed was raised on a cotton farm in a region that is often referred to as the most Southern place on Earth. During his boyhood years in the Mississippi Delta, he was mentored by an African American man known affectionately as Jaybird. Man and boy were inseparable. During their many years together, Jaybird imbued in his young charge many of the Christian values that still guide his life to this day. He also passed on to him his inimitable storytelling ability.

Many of the stories in “One Hundred By Five Hundred” illustrate the loving bond between a wise old black man and a young white boy whom Jaybird loved like his own son. Reed retired from a two-decade farming career and completed a second career as a college professor in Oxford, Mississippi, but it was the guidance of Jaybird that had the greatest impact on his life.

View a synopsis of “One Hundred By Five Hundred” on YouTube.

Consumers can purchase“One Hundred By Five Hundred” at traditional brick & mortar bookstores, or online at Amazon.com, Apple iTunes store, or Barnes and Noble.

For additional information or inquiries about “One Hundred By Five Hundred”, contact the Christian Faith Publishing media department at 866-554-0919.