The Federation of Tamil Sangams of North America (FeTNA) will be hosting its 31st Annual Tamil Convention, June 29th to July 1st, 2018, at the Dr. Pepper Arena, Frisco, Texas, USA. The central theme of the convention is Heritage, Youth & Women. 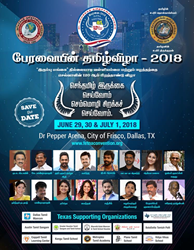 FeTNA three day convention planned to be held between June 29th – July 1st at the Dr. Pepper Arena in Frisco, TX. The central theme of this year’s convention is Heritage, Youth & Women.

Federation of Tamil Sangams of North America (http://www.fetna.org), an umbrella organization of more than 50 tamil associations across North America, today announced its first line-up of speakers and guests list for the three day convention planned to be held between June 29th – July 1st at the Dr. Pepper Arena in Frisco, TX. The central theme of this year’s convention is Heritage, Youth & Women.

Since its inception, FeTNA has been a platform for promoting Tamil Language and Culture, Bringing Together the Tamil Community in USA and North America and being a bridge with the rest of the world Tamil community. FeTNA’s signature event is the three-day premier event “FeTNA Convention” referred to as “Peravai” that is held annually for the last 30 years in the summer time frame and includes a wide variety of cultural, literary and infotainment programs.

According to Mr. Caldwell Velnambi, national coordinator of FeTNA 2018, nearly 100 speakers, guests and artists, across the world, including luminaries in the field of arts and music, pioneers in the field of business and medicine and leaders of eminence, have been invited to educate, enthrall and engage the 5000+ audience. The guest line-up is one of the biggest and is a unique opportunity. The following people will speak in the event:

A highly interactive modern website has been launched (http://www.fetnaconvention.org) and a mobile app and an extensive social media campaign are also being planned. Nearly 5,000 people are expected to attend this event with 1500+ from outside of DFW giving a flip to Frisco economy. The City of Frisco declared January 2018 as the Tamil Heritage Month. Incidentally, Tamil became the first language to be eligible for foreign language credit in Frisco ISD.