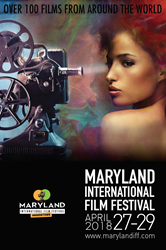 Hovey said, "This year's festival has a strong representation of female filmmakers who are exhibiting extraordinary work. Leena Pendharkar, has a wonderful film called 20 Weeks and it is up for a best feature."

Directed by Leena Pendharkar her break-out film 20 Weeks screens at the Maryland Theatre on Saturday, April 28 at 8:20PM. 20 Weeks is nominated for the Best Feature award at the Maryland International Film Festival-Hagerstown. The romance/drama follows the story of a couple that must decide on how to move forward with a pregnancy when their baby is diagnosed with serious health conditions at the 20-week scan.

Saturday Night Featured Short Films Screening at The Maryland Theatre, 8:20pm:
Asleep: The world premier screening! A young couple embarks on a routine weekend getaway to the beach. As they enjoy the lifestyle and scenery, however, they struggle to deal with the issues that are pulling them apart. Directed by Mitch Walck.

North of Nowhere: A girl, a gun and a last chance. Directed by Scott Ballard.

Bella Donna: A beautiful, faithful wife plans the perfect dinner for her husband, whose idea of perfection is far from hers. Directed by Christopher Basile.

The Last Goodbye: A young farmer lives in the wake of the unexpected loss of his mentor. He is filled with questions, sadness, anger, and utter disbelief. But life will continue on because for a farmer, their work is never done. Directed by Kris Potter.

Maryland International Film Festival-Hagerstown Executive Director, Tracie Hovey says, "This year's festival has a strong representation of female filmmakers who are exhibiting extraordinary work. Leena Pendharkar, has a wonderful film called 20 Weeks and it is up for a best feature. We are so proud of this Saturday night line-up, and very pleased to support the work of woman in the film industry."

Download the App Maryland International Film Festival for a better festival experience! Buy tickets, view show times, trailers, movie info, App only deals from our sponsors, find hotels, and directions to festival locations. You won't want to miss out on the specials and information all packed into this great App developed by Ovation PR.