The 2018 Vincentric Best Fleet Value in America awards process analyzed over 2,500 vehicles using Vincentric cost of ownership data to determine which vehicles deliver the most value to fleet operators. 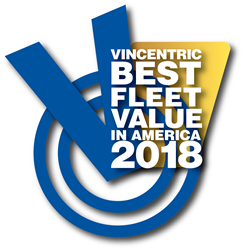 Fleet operators can use Vincentric awards to narrow their choices and identify the vehicles that bring the best value.

Ford earned seven Vincentric awards, led by the Taurus, which won for the eighth time, and the F-150 which took top honors for the sixth time. Nissan had six winning vehicles, with the NV 200 delivering the win for the fifth year in a row in the Small Commercial Van segment and the Infiniti brand earning three awards in luxury segments. Toyota’s strong fleet lineup was evident as they earned five Vincentric awards, led by the mid-size Camry and the Tacoma pickup which won for a record-setting 12th time.

“As more manufacturers make a focused effort marketing to the fleet industry, buyers have an increasing number of high quality vehicles from which to choose,” said Vincentric President, David Wurster. “Fleet operators can use our awards to narrow their choices and identify the vehicles that bring the best value to their selector list.”

To determine the 2018 Vincentric Best Fleet Value in America™ awards, Vincentric performed a cost of ownership analysis measuring over 2,500 vehicle configurations based on typical fleet use. Using eight different cost factors – depreciation, fees & taxes, financing, fuel, insurance, maintenance, opportunity cost, and repairs – each vehicle was evaluated in all 50 states plus D.C. using 28 different lifecycle scenarios. Winners were identified by determining which vehicles had the lowest fleet lifecycle cost in the most scenarios within its segment.

Further information regarding all of the winners of the Vincentric Fleet Best Value in America Awards™ for the 2018 model year and the Vincentric methodology is available at http://www.vincentric.com.

Vincentric provides data, knowledge, and insight to the automotive industry by identifying and applying the many aspects of automotive value. Vincentric data is used by organizations including Cars.com, Mercedes-Benz, Toyota, NADA Guides, Business Fleet Magazine, Nissan, and many others as a means of providing automotive insight to their clientele. Vincentric, LLC is a privately held automotive data compilation and analysis firm headquartered in Bingham Farms, Michigan.