The 39th Amateur Photo Contest winners will be announced at the GRC Annual Meeting in Reno, Nevada, USA. 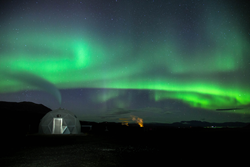 Northern lights over a well protection dome in Hellisheidi and the Nesjavellir power plant, by Bastien Poux

The purpose of the contest is to showcase quality photography featuring geothermal energy around the world.

The Geothermal Resources Council (GRC) is pleased to announce this year’s Amateur Photo Contest. The purpose of the contest is to showcase quality photography featuring geothermal energy around the world.

The winners will be announced at the GRC Annual Meeting & Expo being held in Reno, Nevada, USA from October 14-17.

Photographs on any subject related to geothermal energy can be submitted such as geothermal energy production, Enhanced Geothermal systems (EGS), direct use and geothermal heat pumps. These can include photos of well testing, drilling, operation of geothermal equipment, newly developed equipment, or plant operation, construction of a geothermal plant or plant site, and geological areas or surface manifestations (holding potential for geothermal exploration or development). New this year are acceptance of "GIFs" - short animated movies of a few seconds each.

More information on the GRC Amateur Photo Contest, including a submission form, can be found on the GRC website http://www.geothermal.org. The deadline for submissions is August 24, 2018.

The Geothermal Resources Council (GRC) will be celebrating 50 years of service to the global geothermal energy community in 2020. The GRC is dedicated to advancing geothermal development around the world through education, research, and outreach.