She is the definition of Unstoppable.

She is the definition of Unstoppable. Holly K. Dunn's story resonates with the survivors of hellish acts and brings healing in the dark places. 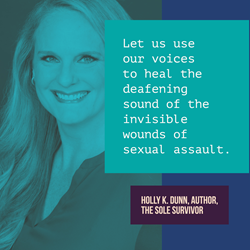 Let us use our voices to heal the deafening sound of the invisible wounds of sexual assault.

Unstoppable, Holly K. Dunn, the president of the Junior League of Evansville, Indiana and, author of Sole Survivor is featured across the nation on her Sole Survivor speaking tour hitting cities: Memphis, Richmond, Quantico and Los Angeles for the spring and early summer of 2018.

The 2018 theme for the Association of Junior Leagues International Annual Conference in Memphis, Tennessee is "Unstoppable" which Holly K. Dunn resonates with as she continues to speak to victims of heinous crimes and acts, works with survivors, speaks to college groups and writes about her story of hope. She is the definition of Unstoppable. Dunn's book is a feature for the Literary Cafe for the annual conference.

The Sole Survivor book will be a special feature for the Junior League of Richmond "Book and Authors" event, a sold-out event for May 2018 and a feature for the FBI National Academy at Quantico, Virginia.

The CBS 48 Hours episode also highlighted book excerpts from Sole Survivor including Holly's family members and Kappa Kappa Gamma Sorority Sisters who were involved during those days. More information can be found at https://www.cbsnews.com/news/48-hours-live-to-tell-the-railroad-killer