Hundreds of new scientific discoveries in cancer reported by Dr. Hayes’ team and other colleagues involved in the Cancer Genome Atlas (TCGA), has generated an enormous public data repository for thousands of researchers around the world. TCGA’s impact on cancer research cannot be overstated with D. Neil Hayes, MD, MPH in a major leadership role 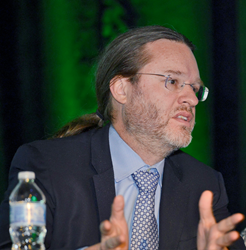 The same excitement that fueled the last generation of cancer genetics research is what I hope to bring to the team at UTHSC / West. We will offer the best of cancer research to patients, right here in the region.

After more than a decade of planning, preparation, research, and discoveries, the Cancer Genome Atlas (TCGA), the flagship effort of the National Institutes of Health, concludes its formal efforts with a flurry of nearly 27 reports in top-tier medical journals this month, including eight reports in the journal Cell. This explosion of new scientific knowledge into the genetics of over 30 different cancer types and 11,000 cancer patients concludes one of the largest team science efforts ever undertaken in the field of cancer. In addition to the final reports from TCGA issued this month, the consortium has published dozens of other high-impact reports in individual cancer types, such as lung cancer, breast cancer, and brain cancer. Through it all, including the work reported this month, D. Neil Hayes, MD, MPH, the scientific director of the UT/West Institute for Cancer Research has played one of only a handful of leadership roles.

As the principal investigator, along with collaborators Dr. Chuck Perou and Dr. Katie Hoadley of the University of North Carolina at Chapel Hill, Dr. Hayes directed one of a half-dozen centers with primary responsibility for data production and analysis. The team led by Dr. Hayes and colleagues generated data on over 11,000 patients using a revolutionary technology called “Next generation sequencing,” focusing primarily on the part of the genome called RNA, the molecule through which DNA exerts its action in cells. This new platform has made possible hundreds of new scientific discoveries in cancer reported by Dr. Hayes’ team and other colleagues involved in the TCGA, and more importantly, generated an enormous public data repository for thousands of researchers around the world. TCGA’s impact on cancer research cannot be overstated, and includes such specific impacts as redefining the way clinicians classify and treat cancer based on molecular patterns. “Dr. Hayes’ expertise in genomic analysis is further reinforced by this remarkable feat of multiple high-impact publications which dramatically enhance our understanding of cancer biology,” said Lee Schwartzberg, MD, FACP, Executive Director of West Cancer Center.

Dr. Hayes is the Van Vleet Endowed Professor in Medical Oncology in the Department of Medicine at the University of Tennessee Health Science Center (UTHSC). He holds secondary appointments in the Department of Genetics, Genomics and Informatics, and the Department of Preventive Medicine in the College of Medicine. Dr. Hayes is in his 11th year as the leader in efforts surrounding The Cancer Genome Atlas and has played a significant role not only in the recent 30 publications, but also across the dozens of reports in top journals Cell, Science, Nature and The New England Journal of Medicine. His most-cited work from the project includes efforts reported on the cover of Cancer Cell and Nature in brain cancer and aerodigestive cancer, which have been referenced thousands of times in recent years by researchers around the world.

Prior to joining West Cancer Center and UTHSC, Dr. Hayes was the co-leader of the North Carolina (UNC) Lineberger Clinical Research Program, professor in the Division of Hematology/Oncology and the Department of Otolaryngology/Head and Neck Cancer Surgery, and Director of Clinical Bioinformatics at UNC. “I stand proudly behind my record in cancer genomics, and my goal is to move genomic paradigms to clinical decision making to advance precision/personalized medicine for cancer patients in the city of Memphis, the state of Tennessee, and beyond, he said. “The same excitement that fueled the last generation of cancer genetics research is what I hope to bring to the team at UTHSC / West. We will offer the best of cancer research to patients, right here in the region” Dr. Hayes said.

About West Cancer Center
West Cancer Center is a multi-specialty, academic, regional cancer center specializing in adult cancer care and prevention. Over 37,000 patients were treated across our 12 locations in 2017 – of which, more than 13,000 were new to our network. A partnership with the University of Tennessee Health Science Center and Methodist Le Bonheur Healthcare has attracted 156 oncology specialists, researchers, and academicians; many from other leading cancer centers, now training the next generation of cancer experts. With the expansion of a new state-of-the-art campus opening in early 2019, West Cancer Center is forecasted to increase annual patient visits to 42,000 and broaden our footprint from 220,000 square feet to more than 300,000 for patient care and research. As a member of the National Comprehensive Cancer Network, West Cancer Center embraces the mission to improve quality, effectiveness, and efficiency of cancer care for all patients regardless of regional location and socioeconomic status. Our commitment to translate cancer science into revolutionary treatment protocols is furthered by the enrollment of 500 patients in clinical trials for 2017 and over 4,210 analytic cases recorded to the tumor registry annually. Focusing on genomic/drug delivery, translational targeting and new clinical pathways also provides patients with the latest, most innovative, personalized cancer treatment plans. West Cancer Center’s dedication to clinical excellence extends beyond conventional care with programs and services that focus on the mind, body, and spirit to improve overall wellness and outcomes. For more information, visit westcancercenter.org and follow us on Facebook, Twitter, YouTube and Instagram.

About the University of Tennessee/West Institute for Cancer Research
The University of Tennessee/West Institute for Cancer Research is a not-for profit public charity dedicated to raising funds for adult cancer research. Located in Memphis, TN, The UT/West Institute for Cancer Research solicits grants from government agencies, foundations and individuals to be utilized to broaden cutting-edge research programs, develop novel cancer treatments and therapeutics, and strengthen patient-focused care in all sectors of the community. Funds donated to The UT/West Institute are designated for research in four major areas of emphasis: Translational Drug Discovery and Development, Cancer Immunotherapy, Women’s Cancers and Community Outcomes. The generous philanthropy of donors and benefactors provides the necessary funding for researchers to create and produce the most effective therapies for cancer patients, with the collective goal of defeating cancer in its entirety.