An Optimally-Timed Burst of Magnetic Energy Could Revolutionize Engine Design. 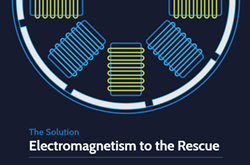 Engine Design Could Be Revolutionized by Magnetic Energy

This innovation stands to have a huge impact on small engine performance by using electromechanical energy to manage torque output.

RK Transportation, led by Randy Moore, has received a patent (U.S. patent #9,806,585 B2) which could revolutionize engine design and significantly increase fuel efficiency along with acceleration and power. The precision technology introduces an electromechanical component to traditional combustion engines that provides a burst of energy at the moment when piston friction subsides. The component—a lightweight magnetic plate—has the potential to add extra torque to the engine while reducing inertia.

Many combustion engines currently use flywheels to overcome friction in energy expenditure. But flywheels are heavy and can reduce acceleration due to the extra inertia. In the place of a flywheel, the RK Transportation solution is to add permanent magnets to the rotor assembly, enabling bursts of perfectly-timed energy to the engine by attracting and repelling the magnets from stationary coils.

“This innovation stands to have a huge impact on small engine performance by using electromechanical energy to manage torque output,” says Randy Moore. “With further development, we could replace the flywheel and transmissions currently used, which would allow us to increase power and reduce fuel consumption simultaneously.”

The new technology has been through years of experimentation and is ready to be implemented in real-world applications, for racing research, automotive engines and smaller engines. More information is available at rk-transportation.com.

Randy Moore, president of RK Transportation, has spent a lifetime “under the hood” of the most advanced technologies—first in the U.S. Navy and then during his 30-year career at Ball Aerospace Systems Division in Colorado. With extensive experience with engines, electronics and robotics, he left Ball to focus on the innovations that had been percolating for decades in his own labs. Now he brings this patent out in order to collaborate with others and to realize a significant transformation for the transportation industry as we know it.