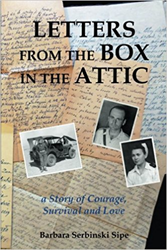 Barbara Serbinski Sipe’s passion for history, especially for World War II, and her desire to better understand of her mother’s journey from Poland to the United States which began in 1940, served as the foundation for her first book, “Letters from the Box in the Attic: A Story of Courage, Survival and Love” (published by Balboa Press).

Based on the letters, documents and photographs she found in her mother’s attic as well as her own memories growing up in a Polish household, this memoir tells the story of Stanislawa Emilia Krasowska Serbinski, a Polish activist who survived hunger, disease, two Soviet prisons and a gulag during the early years of World War II. The more than 48 months of research into the Polish experience of World War II revealed new details of family stories that had been passed down from her mother and how the war ultimately shaped the lasting legacy of Serbinski.

“Like many immigrant families, I’ve heard the story of my parents’ trip to the United States but it was only through the many trips to Poland, hours with her letters and my trusty translator and time spent reflecting on my mother’s own words. I was able to look deeper and really understand my mother in a way I hadn’t before,” Sipe says.

“Letters from the Box in the Attic: A Story of Courage, Survival and Love” has helped Sipe to value and appreciate her own heritage, and in turn, she gives this book to her children as a gift, to aid them in understanding their grandmother and valuing their roots.

About the Author
Barbara Serbinski Sipe is a first generation Polish immigrant from a refugee resettlement camp in Great Britain. She grew up with a passion for history when it came to World War II, specially the European conflict.

Balboa Press, a division of Hay House, Inc. – a leading provider in publishing products that specialize in self-help and the mind, body, and spirit genres. Through an alliance with indie book publishing leader Author Solutions, LLC, authors benefit from the leadership of Hay House Publishing and the speed-to-market advantages of the self-publishing model. For more information, visit balboapress.com. To start publishing your book with Balboa Press, call 877-407-4847 today. For the latest, follow @balboapress on Twitter.