Thor vows to Odin that he will get revenge for his murdered family, forge great kingdom built on strength of his wrath 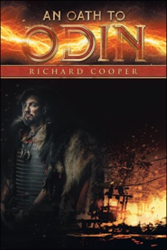 Richard Cooper marks his publishing debut with the release of “An Oath to Odin” (published by iUniverse), a novel that was produced while he used writing as a therapy for him during the time that he provided counseling for the people who were affected by the 9/11 terrorist attacks in America.

Set in Norway, the countries of the North Atlantic, England and Scotland, the book is a coming-of-age story about a young Viking named Thor. Waking in the morning with a splitting headache, Thor finds his whole way of life decimated. He makes an oath to Odin that he will rebuild his father’s village and conquer the marauders who destroyed his village. Setting out, the young Viking must become a man if he hopes to fulfill his oath and rise to prominence.

“Not only is ‘An Oath to Odin’ a book that has high adventure, suspense and graphic battle scenes, it also has a very human component,” Cooper points out. “Many of the problems faced are realistic and the characters are always finding imaginative and unique solutions that can be comical as well as practical.”

As the voyage begins, Thor struggles with his own immaturity and desperate need to succeed. Readers are invited to witness if “An Oath to Odin” will drive Thor to get his revenge and forge a great kingdom built on the strength of his wrath.

About the Author
Richard Cooper has a Bachelor’s Degree in Sociology and a Master’s Degree in Science Education. Currently, he teaches adult education for the Tennessee Department of Correction. He is retired from the U.S. Navy and lives in Tennessee with his wife and daughters. He is currently interested in glass blowing and knife making.