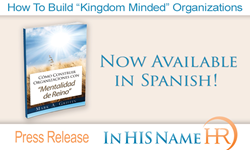 How to Build “Kingdom-Minded” Organizations

In May 2012 How to Build “Kingdom-Minded” Organizations by Mark A. Griffin was published, and its success was significant that organizations across the US and UK now use it as a guide not just within leadership teams but also boards of directors.

Since the 2008 global financial crisis, the world has endured some of the toughest economic times since the Great Depression, with business leaders and employees alike enduring increasing pressure simply to survive. Too often, the workplace has become devoid of hope and genuine purpose, despite it being where many of us spend the majority of our time.

In that time, author Mark A. Griffin, an HR consultant and career coach, has traveled the world researching, partnering and exploring how poverty can be alleviated by job growth within suffering countries like the Ukraine, India, Honduras, Nicaragua, Haiti and the Dominican Republic, in contrast to the charity model that more often fails. That has created increased demand for the book’s release in other languages.

After more than 25 years in a corporate world where pursuit of profit has become paramount, Mark Griffin is adamant there is a better way to do business. In How to Build “Kingdom-Minded” Organizations, Mark inspires Christian business leaders who want to create a values-led organization to bring Christ into the workplace.

With more than two dozen years as an HR executive in companies ranging from small to high-profile Fortune 500, Mark Griffin has emerged as the leading thought expert in human resources from a Christian perspective and speaks at conferences nationwide. Mark also inspires thousands of listeners through a network of Christian radio stations and a 12-part podcast series based on his book.

Mark’s remarkable book continues to empower business leaders to be bold about bringing their faith into their workplace. Aware that it takes great courage to step away from the business practices that dominate America’s corporate world, his book provides simple and effective tools designed to constructively integrate the teachings of Christ into any organization. It provides the starting point for those who want to create, build and develop their own profitable values-led business as a stable, positive environment in which employee wellbeing is enhanced, improving quality and productivity.

Through his organization, In HIS Name HR LLC, Mark is on a mission to provide world-class business consulting that allows clients to be prosperous while still “Kingdom-minded,” by instilling a Christian ethos and establishing goals that reflect that ethos.

Radical, inspirational and affirmative, Mark Griffin’s template for Kingdom-minded businesses is an idea whose time has come.

How to Build “Kingdom-Minded” Organizations is available in both English and now Spanish at Amazon.com. To learn more about the Spanish edition please visit: http://www.organizacionesorientadasalreino.com.

Learn more about Mark A. Griffin and his quest to help the Christian-owned company live their faith by visiting him at http://www.InHISNameHR.com, or connect with him on http://www.Twitter.com/InHISNameHR.