Author Thomas Vanleer’s Newly Released “The Conversation: Who's Talkin?” Follows the Journey of Benjamin Goodlow as He Struggles with the Problems of a Modern Family

“The Conversation: Who's Talkin?” from Christian Faith Publishing author Thomas Vanleer is the story of a modern American family. When Benjamin Aaron Goodlow retires and his wife leaves him, he departs on a personal journey filled with spiritual conflict and self-reflection. 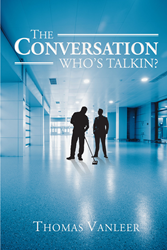 “The Conversation: Who's Talkin?”, a story about a family man coping with the same issues most other families face today in America, is the creation of published author, Thomas Vanleer. Born in the early thirties to a teenage mother and raised by his grandfather, Elize K. Nesbitt, Thomas’s education began in a one-room school house. The Nesbitt School was founded by his great-grandfather. He and his family eventually moved to Evansville, Indiana where he attended Lincoln Elementary and High School. At the age of fourteen, he enlisted in the United States Armed Force. In 1948, Thomas was honorably discharged. He enrolled in Indiana Bible College and later attended Moody Bible College. Thomas was ordained as an itinerant elder in the African Methodist Church then became a chaplain in the Minnesota and Hennepin Correctional Institution. He has been one of the chaplains of the Minnesota Timberwolves for twenty-three years. He is currently an associate minister of Progressive Baptist Church. Thomas Vanleer has written two books. They include his autobiography, “From Promise Land to the Promised Land,” and his current publication, “I’m Just Say’n.”

“This man whom I know as a company janitor is an angel. Damn right, I have plenty to talk about, why my wife left, I need to talk about my wayward children, but especially my wife, whom I miss very much, a daughter that had everything going right for her and turned to drugs, a son who is on a soul-searching mission, who was somewhere in India when last I heard from him, and lastly, Donald announcing that he was gay, and what about me, doing my best to stay pure, to worship God in truth and spirit? I hope He has plenty of time, because this conversation could take weeks!” --Thomas Vanleer

To the outsider, the Goodlow family seems to have it all together. Like many families across the US, however, they struggle with numerous setbacks and untold circumstances beyond their control. The family is fortunate enough to be relatively wealthy, but they face a multitude of other issues. They must deal with the numerous social problems that far too many families are confronting in this violent, fast-paced, technology-driven, and constantly evolving world.

Benjamin Aaron Goodlow II worked his way up the ladder to become the CFO of J. J. Meany Consulting Inc. by demonstrating his excellent skills as an accountant. The father of four children, Benjamin methodically prepared for his and his wife’s retirement, but Sara Helena decided to move several States away after she walked away from their marriage of thirty-five years. Coping with the loss, he heads to Big Ben Lake where he encounters a host of visitors, including a janitor who worked for his company. The experience will change his life forever.

View a synopsis of “The Conversation: Who's Talkin?” on YouTube.

Consumers can purchase“The Conversation: Who's Talkin?” at traditional brick & mortar bookstores, or online at Amazon.com, Apple iTunes store, or Barnes and Noble.

For additional information or inquiries about “The Conversation: Who's Talkin?”, contact the Christian Faith Publishing media department at 866-554-0919.