“In a New York Split Second,” from Christian Faith Publishing author Gene Murphy, is an unforgettable story of organized crime, revenge, and what it does to people who seek it—set in New York City in the ’70s, inspired by historically accurate events in the city that never sleeps, and spurred to life by a Phil Collins song that came on the radio at just the right moment. 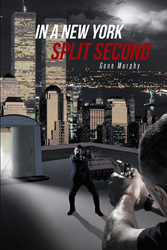 Gene shares the following from his novel, “It was October 18, 1977, in New York City. The Big Apple, rich in history and pageantry, was again on display this evening with the skyline showing off its most famous monolithic landmarks. It was almost time for the city’s nightlife to awaken from its daytime slumber. The Statue of Liberty, looking over Southern Manhattan and the Brooklyn Bridge, still shining from her centennial makeover, was standing tall and proud. Although the lady sentinel of the harbor had witnessed a year of citywide turmoil, tonight she was hoping to hike up her skirt, kick up her heels, and dance a little this evening in celebration … Since the early 1970s, the city’s economy was struggling. Its financial crisis hit all departments, including New York’s finest. The police department was crippled by a hiring freeze. New York was slowly being strangled by the lawlessness of the Son of Sam, an overwhelming number of arsons, and the Mob. A cancer called corruption had spread everywhere. There wasn’t a borough or a government office that was not affected by power, money, and deceit. It was late Tuesday afternoon. TJ and Jack were leaving the police station.”

Published by Christian Faith Publishing, Gene Murphy’s new book is a layered fictional narrative centered on historical events interwoven with the author’s personal experience of NYC to tell the tale of talented Jack and beautiful and brash TJ, star-crossed colleagues in the Organized Crime Bureau bent on taking down the Mob and getting themselves entangled in the evil they seek to destroy.

Murphy’s debut novel does more than offer a riveting story of injustice and those who take it upon themselves to right it. It also shows what happens when one’s own life becomes entangled in complications of right and wrong, when personal desires get in the way of duty, and ultimately what one chooses to do about it when unexpectedly coming face to face with his nemesis and a finger on the trigger.

View a synopsis of “In a New York Split Second” on YouTube.

Consumers can purchase “In a New York Split Second” at traditional brick & mortar bookstores, or online at Amazon.com, Apple iTunes store, or Barnes and Noble.

For additional information or inquiries about “In a New York Split Second,” contact the Christian Faith Publishing media department at 866-554-0919.