“The Blue Flame” from Christian Faith Publishing author Malcolm Linder is a passionate and revelatory series of essays that speak of Christian truths, with the author using anecdotes from his own life along with illustrations to explain biblical concepts such as the ark of the covenant, the Holy Ghost, the origin of Jerusalem, the Sabbath, and the spirit realm. 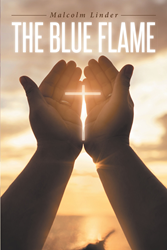 “The Blue Flame”: a thought-provoking book laying out Christian spirituality. “The Blue Flame” is the creation of published author Malcolm Linder, who was born and raised in the inner-city ghetto of Buffalo, New York, and always knew he was destined for the hard path of a prophet.

Malcolm shares, “There is a myth going around that says God doesn’t need us, and we are no more than a dirt clod, and God could get rid of us in the wink of an eye! That is such foolish, religious ignorance and so far from the truth that we must ignore it! God led me to the book of Jeremiah chapter 10, verses 18–21. God is talking about the children of Israel in their rebellious state and what is going to happen to them for their idolatry and so forth. But in the nineteenth verse, God pours out his heart of love for his chosen people, his bowels of compassion, and he misses his time (fellowship) with his creation. His exact words are ‘Woe is me for my hurt! My wound is severe, but I say, truly, this is an infirmity, and I must bear it.’ God is heartbroken because there is no one to raise his tabernacle, so he can dwell amongst his beloved Israel, whom he chose through the seed of Abraham, to bring back humanity to his heart. The one prayer that Jesus prayed is yet to be fulfilled in the body of Christ, and that is that we become one, even as he and the Father are as one (John 17:11).”

Published by Christian Faith Publishing, Malcolm Linder’s new book is an inspiring series of spiritual essays that revive the faith on a deeper level by introducing Bible-based knowledge that is less often used to accompany sermons and thereby keeping believers at a distance.

Linder attempts to close that distance, relating events from his own life where he had to repent and relearn the same principles he is called to preach—and through his enlightenment and working-out of his own salvation, the reader is better equipped to do the same.

View a synopsis of “The Blue Flame” on YouTube.

Consumers can purchase “The Blue Flame” at traditional brick & mortar bookstores, or online at Amazon.com, Apple iTunes store, or Barnes and Noble.

For additional information or inquiries about “The Blue Flame”, contact the Christian Faith Publishing media department at 866-554-0919.