Leo J. Battenhausen’s Newly Released “The Evilution of America” Is an Informative Work on the Battle Between Good and Evil in Present America

“The Evilution of America” from Christian Faith Publishing author Leo J. Battenhausen, MA, MSW, LCSW, LCADC is an eye-opening work about the unseen evil forces that has been gradually affecting the moral values of Americans and their value in God and how the people in politics and media promote evil. 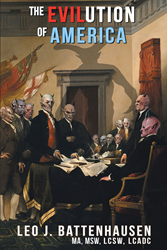 “The Evilution of America”: a must-read book about the depletion of Godly characteristics of Americans today in a country known as the “greatest nation in the world.” “The Evilution of America” is the creation of published author, Leo J. Battenhausen, MA, MSW, LCSW, LCADC, a licensed clinical social worker, alcohol and drug counselor, and certified relationship specialist who has been working in the field of psychology and human services for over twenty years.

Battenhausen shares, "There is not a political battle going on in America today, but a Spiritual War. It is obvious, to many believers in God, that we are dealing with far more dangerous issues than Democrats versus Republicans. We are in the midst of a battle between Good and Evil, as well as for our souls. The disease of Political Correctness and movement toward a New World or One World Order are brainwashing the minds of many with false facts, fake news and re-written history, all of which are causing millions to abandon God's Will, morality, decency and simple common sense. Donald Trump's victory for the White House, realistically, should have never happened. However, by the power of prayer and God's help, he overcame all odds. Now the Establishment and Satan himself are all running frantically. Was this victory God's way of allowing America one more chance to return to the values that made the country great to begin with? I believe it was."

Published by Christian Faith Publishing, Leo J. Battenhausen’s new book is a thought-provoking work that exposes what has been happening to Americans under liberal leaders and media men who inculcate evil and selfishness in the country.

He intends this book for those Americans who ask the question, “What happened?” when it comes to America’s current conditions in the field of governance, media, among others. Battenhausen tackles the unhealthy liberal point of view evident in the country and the need for a healthy political discussion anchored in a godly perspective.

View a synopsis of “The Evilution of America” on YouTube.

Consumers can purchase “The Evilution of America” at traditional brick & mortar bookstores, or online at Amazon.com, Apple iTunes store, or Barnes and Noble.

For additional information or inquiries about “The Evilution of America”, contact the Christian Faith Publishing media department at 866-554-0919.