CASSIUS Teams Up With Brooklyn-Based DJ For Dynamic Cover Experience 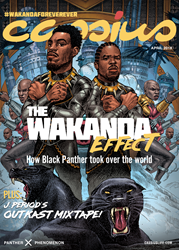 The digital destination for urban enthusiasts, millennials and lovers of Black culture, CASSIUS released its April Digital Cover: Panther x Phenomenon while teaming up with mixtape DJ J. Period for an exclusive release of his new mixtape J. Period Presents. . . #WAKANDAFOREVEREVER. Both the mixtape and cover dropped last week Friday, April 20, 2018. The collaborative April cover comes after much critical acclaim to the film “Black Panther” which earned over a billion dollars in worldwide sales, even toppling Titanic and sparked a global movement.

"The cultural and commercial impact of Black Panther is undeniable. This proves, once again, that Black culture is the largest cultural force to be reckoned with. From Hollywood to the largest corporate boardrooms to families of all ethnicities, Black Panther has set a new standard for us all, which we pridefully honor with this month’s Cassius cover." – Detavio Samuels, President, iOne Digital and One Solution/OneX

The impact of Black Panther is not dying anytime soon, and CASSIUS will continue to deliver stories centered around this historical phenomenon. While teaming up with DJ J. Period, CASSIUS gained exclusive access to the award-winning DJ & Producer who mixed legendary hip-hop duo Outkast tunes to take listeners on an exclusive journey into the secret forests between Wakanda and Stankonia. CASSIUS will release a series of work surrounding the influence of Black Panther including: cover story and exclusive interview with J. Period, an in-depth listen into the new mixtape, Wakanda-inspired art and the film’s record-shattering impact around the world.

"DJ J. Period's Outkast mixtape blends the pride we felt pressing play on 'Stankonia' with the Black pride a whole new generation is getting to experience with the success of 'Black Panther'.’ Our April cover, Panther x Phenomenon, puts the film’s global impact through the lens of millennials and Gen Z-ers. It's our 'I’m Black and I’m Proud' moment--and that pride just reached new levels." - Jada Gomez-Lacayo, Deputy Editor, CASSIUS

ABOUT CASSIUS
CASSIUS is an experience. It presents news and storytelling differently. It provokes, disrupts, informs and uplifts. As a 21st century digital platform dedicated to telling the unvarnished truth, it gives daily voice to those much talked about, but rarely spoken to. Through original reporting and sharp commentary, no topic is left unturned. Borrowing from the world of print, CASSIUS brings its readers back to the classic monthly cover. CASSIUS takes on its own unique spin with digital covers - using them to ignite groundbreaking conversation around burning social topics. Each month, CASSIUS will feature original cover art tackling themes such as power, identity, and race. Topical video exploration with every cover further amplifies the uniquely informed CASSIUS point of view.

ABOUT iONE DIGITAL
iONE Digital (previously known as Interactive One) is the dominant digital media platform for brands to reach urban enthusiasts. A division of Urban One, Inc. (formerly known as Radio One [NASDAQ: UONE and UONEK, urban1.com), iONE Digital reaches 24MM+ monthly digital consumers across a network of online destinations comprised of two platforms - CASSIUS, inclusive of CASSIUSLife (Millennial Lifestyle & Culture), GlobalGrind ( Millennial Pop Culture), HelloBeautiful (Women's Lifestyle) and NewsOne (News/Affluent); and BHM DIGITAL, inclusive of Bossip (Pop Culture & Entertainment), HipHop Wired (Hip-Hop News & Music) and MadameNoire (Women's Lifestyle) - as well as other Urban One owned and operated properties and affiliates. iOne Digital was launched in 2008 by Urban One, to complement its existing portfolio of media companies targeting Black Americans. Since then, its news, entertainment, video and lifestyle content has driven its growth. Today, iONE Digital is the largest distributor of urban digital content in the country and through its relationship with other Urban One companies, is the only fully integrated multimedia company that powerfully reaches over 82% of Black Americans. For more information, visit iOnedigital.com.