Shawn Given’s Newly Released “Maybe So, Maybe No” is a Touching Novel of a Couple Revisiting Questions of Their Marriage Just Before Their Momentous Fiftieth Anniversary.

“Maybe So, Maybe No” from Christian Faith Publishing author Shawn Given is an intimate and moving novel of an old couple who, on the brink of their fiftieth year of marriage, begin to properly reassess their relationship, using a biblical foundation to answer a series of pressing questions about their love and faith, and whether they had enough time left together to make up for the wasted years. 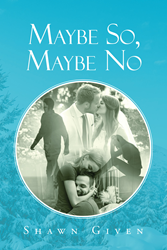 “Maybe So, Maybe No”: a poignant novel about the spiritual life of a relationship toward the end of physical life. “Maybe So, Maybe No” is the creation of published author Shawn Given, an English and history major who taught high school, worked in a library, and has been married for fifty-six years with two daughters, five grandchildren, and four great-grandchildren.

Shawn shares, “Why does celebrating our fiftieth anniversary seem pretentious or fake? If it seems that way to me, does it seem that way to Monroe also? Why have I, or we, let so much time and so many false accusations or imaginings pass without confronting them? Were we afraid of what the truth would reveal? If so, what did we intend to do about it? Which one of us changed first, or did one change in retaliation? Was the green-eyed monster, jealousy, part of the problem? Was it unfounded? What part did pride play in our lives? Had I expected too much, thus making Monroe my god? Was I guilty of idolatry? To get to the bottom of this reluctance to celebrate their milestone of the upcoming anniversary, Shan realized she had to start at the beginning. She had to be truthful with herself and face her own demons, as well as Monroe’s. Honestly, she wasn’t sure one year would be sufficient to get all the answers.”

Published by Christian Faith Publishing, Shawn Given’s new book is a profound and deeply human tale where the wife in the couple, Shan, asks herself a series of difficult questions on the lead-up to her fiftieth wedding anniversary—just one of the questions being: was she preordained or destined to be married to Monroe?

Finally facing such truths about what role jealousy and miscommunication must have played in their relationship, Shan must also wonder ultimately whether they have wasted six years of their lives together, making their milestone fiftieth anniversary merely a forty-fourth, and more importantly, she wonders whether they will be able to make up for it in the short time left to them.

View a synopsis of “Maybe So, Maybe No” on YouTube.

Consumers can purchase “Maybe So, Maybe No” at traditional brick & mortar bookstores, or online at Amazon.com, Apple iTunes store, or Barnes and Noble.

For additional information or inquiries about “Maybe So, Maybe No”, contact the Christian Faith Publishing media department at 866-554-0919.