Michael Fuljenz of Universal Coin & Bullion will bring the first exhibit in Texas of recently recovered treasure from the fabled “Ship of Gold,” the SS Central America, to the NRA convention, May 4-6, 2018. 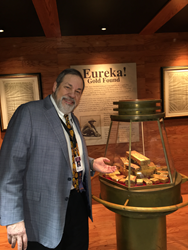 The recovered items are a time capsule of the great California Gold Rush. You think about who discovered the gold, who held it, who decided to let it go at the last minute as the ship was sinking. The treasure is history you can hold in your hands.

The first public display in Texas of more than $5 million of historic California Gold Rush-era sunken treasure gold and silver coins, gold bars and unopened satchels of California gold dust recovered in 2014 from the fabled sunken “Ship of Gold,” the SS Central America, will be May 4-6, 2018 in Dallas. The exhibit will be showcased in a 40-foot long re-creation of the ship’s hull.

The display will be at the National Rifle Association’s Annual Meetings & Exhibits in the Kay Bailey Hutchinson Convention Center, 650 S. Griffin St., and exhibited by Universal Coin & Bullion, Ltd. (http://www.UniversalCoin.com/treasure) of Beaumont, Texas which is making some of the recently recovered treasure available for the first time for purchase by the public.

“The Central America was a 280-foot long, three-masted side-wheel steamship carrying tons of California gold when she sank in a September 1857 hurricane during a voyage from Aspinwall (now Colón), Panama to New York City. The loss of the gold cargo 161 years ago was a major factor in the economically devastating financial panic of 1857 in the United States,” explained Fuljenz.

The shipwreck site was discovered in September 1988 more than 7,000 feet below the surface of the Atlantic Ocean about 160 miles off the coast of North Carolina. The last expedition to successfully retrieve a portion of the treasure was completed in 2014.

“The recovered items are a time capsule of the great California Gold Rush. You think about who discovered the gold, who held it, who decided to let it go at the last minute as the ship was sinking. The treasure is history you can hold in your hands,” said Fuljenz.

Bob Evans, the chief scientist on the 1980's mission that first located and recovered a portion of the fabulous sunken treasure and who assisted with the 2014 recovery, will be at the exhibit each day during the show to meet with visitors. Evans also will participate with Fuljenz to discuss shipwreck treasure during the 9th Annual Freedom First Financial Seminar about gold on Saturday, May 5, at 11 a.m. in Room D172 of the convention center.

Every seminar attendee will be entered in a random drawing to win a piece of shipwreck gold, and all attendees will receive a free silver coin or silver round and a copy of Mike Fuljenz’ award-winning gold guide.

In addition to recovered gold and silver coins and assayers’ gold ingots, the Ship of Gold exhibit in Dallas will include a type of historic SS Central America item not seen until this year when this treasure was made public: leather satchels filled with more than 1,000 ounces of 1857 California gold dust that were recovered from a safe on the sunken ship.

“We are making this gold dust available to the public for the first time, as well as some of the recovered gold and silver coins. Everything has been certified for authenticity and grade by Professional Coin Grading Service. Recovery expeditions scientist Bob Evans has personally certified the authenticity and provenance of the gold dust,” Fuljenz added.

Mike Fuljenz is an NRA benefactor, a Golden Ring of Freedom member and long-time supporter of the NRA's Eddie Eagle Gunsafe® program. Known as America's Gold Expert®, he has won more than 60 prestigious national and regional awards and honors for his consumer education and protection work about rare coins and gold and silver. A respected community leader in his hometown of Beaumont, Texas, Mike also has taught law enforcement seminars and served with distinction as a consultant to the Federal Trade Commission, United States Mint and Royal Canadian Mint, and is on the Boards of Directors of the influential Industry Council For Tangible Assets and Crime Stoppers of Beaumont, Texas. He is a member of the prestigious Professional Numismatists Guild and also a long-time member of the Press Club of Southeast Texas.