Patrick J. Kennedy to be Inducted into The Rhode Island Heritage Hall of Fame May 5

Patrick J. Kennedy will be among nine prominent Rhode Islanders inducted into the Rhode Island Heritage Hall of Fame on Saturday, May 5, 2018, at The Crowne Plaza Hotel in Warwick, Rhode Island. 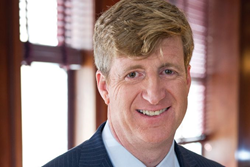 I am thrilled to be inducted into the Heritage Hall of Fame, especially by the state’s historian and my former professor from Providence College, Patrick Conley.

Patrick J. Kennedy will be among nine prominent Rhode Islanders inducted into the Rhode Island Heritage Hall of Fame on Saturday, May 5, 2018, at The Crowne Plaza Hotel in Warwick, Rhode Island.

Kennedy began his career serving three terms in the Rhode Island State Legislature (1988 – 1994). In 1994, he was elected as a Democrat to represent the 1st Congressional District of Rhode Island, where he was the youngest member of Congress. He served eight terms in Congress (1994 – 2011), including a term as Chairman of the Democratic Congressional Campaign Committee (1999 – 2001). During his time in Congress, he championed health care reform and mental health care, most notably serving as the lead sponsor for the Mental Health Parity and Addiction Equity Act of 2008, which was signed into law by President George W. Bush with bipartisan support. Commonly known as the Federal Parity Law, this legislation requires insurance companies to cover of the brain, such as bipolar disorder or alcohol use disorder, no more restrictively than diseases of the body, such as cancer or heart disease.

Since leaving Congress in 2011, Kennedy has continued to advocate on behalf of mental health and addiction treatment and for parity enforcement. He is the founder of The Kennedy Forum; co-founder of One Mind; and author of the New York Times bestseller “A Common Struggle: A Personal Journey Through the Past and Future of Mental Illness and Addiction.” In 2017, he was appointed to the President’s Commission on Combating Drug Addiction and the Opioid Crisis. Kennedy continues to share his story at events nationwide, connecting with diverse audiences and empowering families to fight back against illegal insurance denials for mental health or addiction treatment services through a website he created, ParityRegistry.org. Due to his tireless efforts to inform, educate, and inspire the public through his own personal experience with mental illness and substance use disorder, Kennedy was recently named as a recipient of the Voice of Recovery Award from the nation's leading recovery advocacy organization, Faces & Voices of Recovery.

The Rhode Island Heritage Hall of Fame was created in 1965 to honor “any individual who has brought credit to Rhode Island, brought Rhode Island into prominence, and contributed to the history and heritage of the state.” Inductees must have been born in Rhode Island; lived, studied, or worked in Rhode Island for a significant time; or made his or her reputation in the state. The event will be the organization’s 54th Annual Banquet and Induction Ceremony.

“I am thrilled to be inducted into the Heritage Hall of Fame, especially by the state’s historian and my former professor from Providence College, Patrick Conley,” said Kennedy. “I was honored to serve the people of the 9th District in Providence and the people of the 1st Congressional District in Washington, D.C. I will always be grateful not only to my friends and neighbors but also to my political opponents for the formative experiences that helped shape me into the man I am today. I am humbled by such a prestigious recognition of my contribution to the great state of Rhode Island and congratulate all of the others inductees.”

To learn more about The Rhode Island Heritage Hall of Fame, please visit http://www.riheritagehalloffame.com. For tickets to the banquet and induction ceremony, please contact 401-556-6174 or somravanh(at)gmail(dot)com.

About Patrick J. Kennedy:
Former Congressman Patrick J. Kennedy (D-R.I.) is a lifelong mental health advocate and former member of the President's Commission on Combating Drug Addiction and the Opioid Crisis. He is the founder of The Kennedy Forum, a convening think tank tackling mental health and addiction issues and co-founder of One Mind, a global leader in open science collaboration for brain research. In 2015, he co-authored A Common Struggle, a New York Times best seller, which details his personal journey and provides a roadmap for the future of mental health policy. Mr. Kennedy is pushing for full enforcement of the Mental Health Parity and Addiction Equity Act of 2008. He was the lead sponsor of this groundbreaking legislation, which requires health plans cover mental health, eating disorder, and addiction care health benefits the same way they cover physical health benefits. To learn about Mr. Kennedy’s efforts, please visit http://www.patrickjkennedy.net.