Recent release “When the Stars Were Big and Bright” from Page Publishing author Frederick Warrick Crawford is an extraordinary book about Lion Leatherton, a man who has a dark childhood with his abusive father and still manages to make a name for himself as an actor despite the obstacles he faces due to his evil uncle, Billy Ray, who causes his troubles. 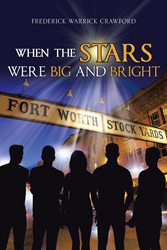 Frederick Warrick Crawford, a former army man who has appeared in television commercials and has worked for a television affiliate and a franchised theatrical agency for many years, has completed his new book “When the Stars Were Big and Bright”: a spellbinding story about the constant harassment Lion experiences because of his uncle, Billy Ray, who has threatened his parents for years and uses his semi-famous reputation to publish his life story.

Author Crawford describes Lion’s struggles in telling the truth about his serious illness—another main problem he is dealing with—to the love of his life: “Taking a sip from his cup, Lion began to feel at fault with regard to not telling Annie that he had only a few years to live. So far, she had been completely honest with him, and he did not like holding back the truth. Lion was concerned that if he revealed the facts, Annie would leave and never come back, and he undoubtedly did not want that to happen. But telling Annie that her destiny included being a widow would be a harsh reality for such a devoted woman to tolerate. On the other hand, to remain being secretive was easier said than done.”

Published by New York City-based Page Publishing, Frederick Warrick Crawford’s new book is an engrossing story on an actor who becomes mentally exhausted as he protects the woman he loves from the truth, handles his uncle, and attempts to keep his family secrets behind him while fulfilling dreams. A life-changing meeting occurs, and he accepts a position at a television network affiliate.

Readers who wish to experience this enlightening work can purchase “When the Stars Were Big and Bright” at bookstores everywhere, or online at the Apple iTunes store, Amazon, Google Play, or Barnes and Noble.