SLCC Graduation Day highlights include hearing from Patriots wide receiver Malcom J. Mitchell and honoring those who have made an impact on SLCC and the community. 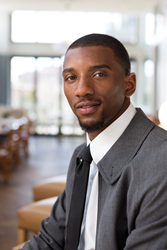 Salt Lake Community College will honor graduates during commencement ceremonies May 4, 9:30 a.m. at the Maverik Center in West Valley City.

New England Patriots wide receiver and award-winning children’s book author Malcom J. Mitchell will give the keynote speech. Mitchell is well known for his role as wide receiver on the New England Patriots and helping the team win a Super Bowl in 2017, but in literary circles, particularly among young readers, he’s been receiving a lot of attention off the playing field. While a student athlete at the University of Georgia, Mitchell was recognized as the National Captain of the Allstate Good Works Team for his frequent visits to elementary schools to read to students and talk about literacy, the first student ever at UGA to win this honor.

Ashok Joshi and Pam Perlich have been chosen to receive honorary doctorates. Both have made significant contributions to SLCC and their community over the years. A past SLCC Trustee, Joshi now considers himself retired, though recently he was executive director of Technology Holding LLC. Known as a serial entrepreneur, he has ten ventures under his belt and 137 patents, mostly in the electrochemical area, that bear his name. Perlich is currently Director of Demographic Research at the Kem C. Gardner Institute for the University of Utah, having previously taught economics at the U of U and Westminster College. Perlich also held the post of research economist for the Utah Governor’s Office of Planning and Budget from 1993 to 2000.