Celebrity chef, Army veteran, and health correspondent Jerome Brown celebrates his Southern roots with his new cookbook Carolina Soul: The Down Home Taste of the Carolinas. In the book, the Personal Chef to the Stars showcases a compilation of family recipes, client favorites and low-calorie meals indigenous to North and South Carolina. 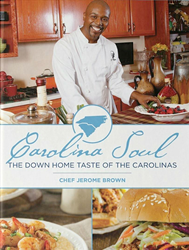 Carolina Soul: The Down Home Taste of the Carolinas was released April 10, 2018, and is due to hit bookstores in May.

“I put everything I could into this book, and I did it with love.”

Celebrity chef, Army veteran, and health correspondent Jerome Brown makes it no secret that he loves his home state of North Carolina, so it should be no surprise that his newly released cookbook is a celebration of sorts to the state’s cuisine and culture.

Carolina Soul: The Down Home Taste of the Carolinas was released April 10, 2018, and is due to hit bookstores in May. In the book, the Personal Chef to the Stars showcases a compilation of family recipes, client favorites and low-calorie meals featuring frog legs, oxtails, marsala meatloaf, and other Southern delicacies indigenous to North and South Carolina.

“I put everything I could into this book, and I did it with love,” said Chef Rome, who has cooked for athletes and celebrities such as Shaquille O’Neal, Colin Powell, Byron Cage and Cam Newton. The former Food Network Star and featured Epcot International Food & Wine Festival chef prides himself on putting a healthy spin on Southern cuisine, helping many of his clients, like former NBA great Shaquille O'Neil, lose weight.

Similar to his bestselling cookbook, Eat Like a Celebrity: Southern Cuisine with a Gourmet Twist, Chef Rome included stories of his family and the influence that Carolina has had on his life and on the country as a whole.

“If you loved Eat Like a Celebrity, you’re absolutely going to love Carolina Soul,” Rome said. “I talk about the origins of Pepsi and some of my favorite restaurants along the Carolina coast. This book is nothing more than being authentic, giving readers what is within me.”

He added that Carolina Soul is especially special because his family contributed to bringing the book into fruition. For instance, he prepared many of the recipes in his sister’s kitchen, and he added the meatloaf recipe because it was specially requested by his nephew. Additionally, the book celebrates everything related to the history of North and South Carolina from its college-related color scheme to the photos placed throughout the book.

Carolina Soul has already amassed tremendous pre-sales through social media, and Chef Rome is also scheduled to make a special appearance at the Miami Black Women in Wine Celebration on April 28, and will then set sail April 29-May 6 on the Tom Joyner Foundation's Fantastic Voyage. Copies of Carolina Soul will be available at all events.

Carolina Soul was published by Prosperity Publications, LLC and is currently available for order on both Chef Rome’s and Prosperity's websites. Copies can be purchased for $30 plus shipping and handling.

For interview opportunities or to schedule an appearance, contact Meet the World Image Solutions at (504) 505-5894.

Chef Rome has been called the Personal Chef to the Stars, having cooked for Shaquille O'Neil, Byron Cage, Lamman Rucker, and Star Jones.Chef Rome