The Film Festival of Columbus will return to the Gateway Film Center in Columbus, Ohio August 9-12, 2018. Organizers are currently accepting submissions from filmmakers. 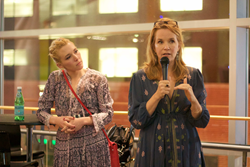 Madelyn Deutch and Lea Thompson speak at the 2017 Film Festival of Columbus.

For the 7th year, the Film Festival of Columbus, brings creators, film industry insiders, and diverse audiences together to celebrate indie filmmaking for four days, August 9—12 at the Gateway Film Center.

As part of a new partnership to grow the reach of the festival, organizers selected festival veteran and experience architect, Mike Gallichio. Gallichio heads the entertainment and festival operations company MGNow.

"With growing attendance and participation, we knew it was time to take the festival to the next level regarding branding and recognition. We immediately thought of Mike. His extensive experience with operations as well as designing award-winning festivals in the region made him a perfect partner,” stated John Daugherty, co-founder of the Film Festival of Columbus.

While screening and recognizing amateur and established filmmakers is central to the mission of the festival, drawing attention to Columbus as a filming destination is a key component of the event.

"The Film Festival of Columbus is quickly becoming the go-to festival in the region and the impact to Columbus is significant. Not only are we uniting artistic communities with the growth of the festival, but we are also simultaneously highlighting Columbus as a 'film-friendly' and filmmaking destination. All of which are great for economic and cultural development,” said Chris Hamel, co-founder of the Film Festival of Columbus.

Submissions for all sections of the festival are currently open. Filmmakers can submit a film for consideration via the online platform FilmFreeway.

The festival accepts films in the following categories: animation, feature, documentary, TV, and shorts (under 45 minutes).

In addition to screenings, festival organizers are planning a variety of events over the four days including workshops, receptions, and artist talks.

Submission rules, regulations, and general information can be found at filmfestivalofcolumbus.com. Questions regarding submission can be directed to John Daugherty via email at johnd@ffocol.com.

About the Film Festival of Columbus