At the 2018 Winter Guard International Championships, 7 of the 18 awards were earned by groups exclusively using Yamaha marching instruments 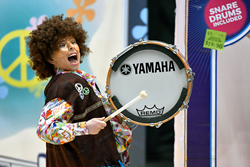 “For decades, we’ve had the honor of watching many of WGI’s top groups use Yamaha percussion instruments as well as pro audio equipment. More recently, with the addition of the Winds division, we’re able to provide quality instruments to even more WGI members,” said Troy C. Wollwage, Yamaha.

Yamaha-equipped performers made a strong showing at the 2018 Winter Guard International (WGI) Percussion and Winds World Championships, with 7 of the 18 awards going to groups exclusively using Yamaha marching instruments. The Championships were held at a number of venues located in and around Dayton, Ohio including University of Dayton Arena, Wright State University’s Nutter Center and BB&T Arena at Northern Kentucky University. Since 1998, ensembles using Yamaha equipment have won more than 120 medals in WGI competition.

In a season that runs from January through the April 19-22 World Championships, WGI “Sport of the Arts” events combine theatrics, athletics and musicianship in a unique way, serving as a creative and educational opportunity for thousands of young musicians. The 2018 season featured over 215 ensembles from across the country, and a few around the world.

For decades, WGI’s musical competition focused exclusively on percussion groups; in 2015, the organization added a separate Winds competition, which has been growing in popularity ever since. Ensembles compete in separate Scholastic and Independent divisions, each boasting a range of classes.

“Whether you’re talking about the elite World Class groups or the impressive young performers in WGI’s A and Open classes, the quality of the work by the young musicians, instructors, and their parents is amazing,” said Troy C. Wollwage, percussion marketing manager, Band & Orchestral division, Yamaha Corporation of America. “For decades, we’ve had the honor of watching many of WGI’s top groups use Yamaha percussion instruments as well as pro audio equipment. More recently, with the addition of the Winds division, we’re able to provide quality instruments to even more WGI members.”

At the WGI World Championship Finals, Yamaha continued its tradition of awarding scholarships to two deserving WGI performers. The 2018 Yamaha/Dennis DeLucia Scholarship recipient was Colin Bradley from Orange County High School in Orange, Virginia. This scholarship is named for the acclaimed teacher, arranger and clinician who continues to contribute both indoor and outdoor marching music. Jack Higham from Burleson Centennial High School in Burleson, Texas won the 2018 Yamaha Music Education Scholarship, which supports students pursuing careers in music education. “For the entire Yamaha team, awarding these scholarships is always a highlight of the entire year,” Wollwage said. “We’re proud to work for a company that believes in and supports music education.”

In addition to Yamaha providing instruments and sound equipment to many groups competing in WGI this year, dozens of Yamaha Performing Artists took part as instructors, judges, ensemble directors and mentors throughout the season. Jeff Queen, former member of Blast!, provided rudiment lessons to all students and performers who attended the WGI Championships. Staged as a “silent drumline,” students were able to play on Yamaha DTX pads with headphones and hear Jeff’s instruction simultaneously.

Other Yamaha artists included Ian Grom and John Mapes, who worked with Chino Hills and Pulse Percussion; Tony Nunez and Kevin Shah, who directed the award-winning ensemble from Arcadia; Tom Aungst who worked with silver-medalist Dartmouth, and Jason Ihnat who leads Spirit Winter Percussion. “By sharing their time with WGI ensembles, these Yamaha artists not only teach young people how to be better musicians, but they’re also on hand to offer important life lessons about teamwork, discipline and leadership,” Wollwage said.