“Ebenezer: National Security from a Biblical Perspective” from Christian Faith Publishing author David J. Leach is an important and thought-provoking book that seeks to reestablish a foundation of biblical truth within the institutions of national security, in favor of bringing America back to standing as the Ebenezer, or the “stone of help,” a reminder of God’s power and protection for his people. 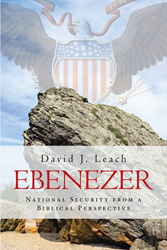 Leach shares, “Significantly, during the past fifty years, the God who simultaneously gave us life and gave us liberty is being disregarded in the most important deliberations at the highest levels of government. National security policy discussions revolve around political considerations and short-term wins and losses which will garner the best media bias in favor of the policies promulgated and which might provide payback for past political favors and votes. The long-term ramifications of those policies are not based upon biblical principles, unless the interpretation of the Bible fits what humanist politics deem appropriate for the times and in accordance with a ‘living Constitution’ perspective.”

Intricately researched, illustrated with maps and statistic charts and full of scriptural references, the author’s seven theses home in on their point with all the force of a fully-armed battalion that knows God and His Word are on their side—readers likewise will benefit from such knowledge to aid in their approaches, responses, and support of issues as they relate to national security in America.

View a synopsis of “Ebenezer: National Security from a Biblical Perspective” on YouTube.

Consumers can purchase“Ebenezer: National Security from a Biblical Perspective” at traditional brick & mortar bookstores, or online at Amazon.com, Apple iTunes store, or Barnes and Noble.

For additional information or inquiries about “Ebenezer: National Security from a Biblical Perspective”, contact the Christian Faith Publishing media department at 866-554-0919.