“The Mountains are Calling” from Christian Faith Publishing author Arif Gilany uses his story to lay out a vision. Arif hopes to encourage others to move in the direction of their dreams, so they can fulfill the possibilities presented by the great potential they all have inside them. 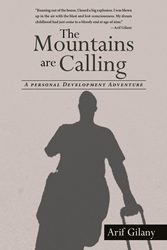 “The Mountains are Calling”: an inspirational story about a boy who survived near-death in a war and found prosperity in life. “The Mountains are Calling” is the creation of published author, Arif Gilany. Arif came to Canada as a Kurdish refugee caught in the war between Iraq and Iran. His exceptional abilities and talents, coupled with his highly intuitive and uplifting personality, have allowed him to forge inroads between Muslims, Jews, Christians and those of other faiths. He is forever welcoming and inclusive of those who wish to bridge the road to peace, success, and prosperity.

“This book is not about mountains, rivers, or lakes. Rather, it is about the calling of your own heart: the desire to strive and live the best life you can. To become the best version of yourself. If my story resonates with you, you will see why I decided I was not going to sit back and let life happen to me. I made up my mind that I was going live as decided and let God direct my path.” --Arif Gilany

Published by Christian Faith Publishing, Arif Gilany’s new book is his story and the manifestation of his vision to inspire others. When Arif Gilany was seven, the Gilany home was bombed during the war between Iran and Iraq. Arif sustained life-threatening injuries and remained in a coma for ten days. He then spent months in the hospital where he was unable to eat on his own. The experience pushed him to embrace reading, personal development, and adventure. He spent two harsh years in the mountains of East Kurdistan with his family of seven sisters and two brothers. Surviving all the chaotic challenges and crisis in his motherland, Arif Gilany remained strong in his moral and cultural values.

In 2013, Mr. Gilany sustained a second head injury after a serious hit and run accident while on his bicycle, which led to a second coma that lasted for seven days. It was the beginning of an awakening. While his body lay lifeless on Yonge Street in Toronto, Gilany experienced a flashback, reliving the ordeals of his childhood. He rediscovered the universal laws of the mind, spirit, and faith. He was given a glimpse into a very real dimension of God’s mercy in the most hopeless moments of his life. Since then, his vision to make a difference has never waned, despite his roller coaster life of struggles.

“We all need something or someone to help us bring out our full potential, our hidden talents and greatness. You have God-given greatness in you, share it with others and you will find true happiness.” --Ivan Zednick

View a synopsis of “The Mountains are Calling” on YouTube.

Consumers can purchase “The Mountains are Calling” at traditional brick & mortar bookstores, or online at Amazon.com, Apple iTunes store, or Barnes and Noble.

For additional information or inquiries about “The Mountains are Calling”, contact the Christian Faith Publishing media department at 866-554-0919.