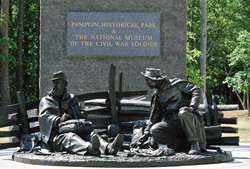 A bronze statue of two soldiers in bivouac sets the theme of the park – the life and times of the common soldiers.

Pamplin Historical Park is only 16 miles from Grant’s HQ in Hopewell VA, 27 miles from the historic James River Plantations and 58 miles from Colonial Williamsburg, convenient to both Interstates 95 and 85 and US Highways 1 and 460. The park includes 424-acres of flat, fertile farmland typical of the surrounding areas in Prince George and Dinwiddie Counties in Central Virginia.

Visitors can begin their walk though time and place at The National Museum of the Civil War Soldier, where a bronze statue of two soldiers in bivouac sets the theme of the park – the life and times of the common soldiers. Travel back to April 2, 1865, when Union troops broke through the Confederate lines defending Petersburg – a battle which led to the end of the Civil War one week later.

The multi-media tour includes 50 stops inside The National Museum of the Civil War Soldier, featuring the stories of 13 soldiers, both Union and Confederate. Their narratives are created from letters home and other dated sources. Scenic recreations within the museum include details from camp life to drill, medicine and medical equipment used in the war, musical bands, combat and weapons.

The 33 stops out in the park cover the Breakthrough Battle, with stories at particular spots where incidents occurred. Also, they include demonstrations of farming, slave life and a restoration of Tudor Hall plantation house, built circa 1812.

Tudor Hall has special meaning to the owner of the park, [Dr. Robert B. Pamplin Jr, whose ancestors, the Boisseau family, occupied the plantation house up until the spring of 1864. Also, Tudor Hall served as the headquarters for Confederate General Samuel McGown from October 1864 to March 1865. Pamplin purchased the land through the R. B. Pamplin Foundation.

About Pamplin Park: A National Historic Landmark and one of “Virginia’s Best Places to Visit” according to the Travel Channel, Pamplin Historical Park & The National Museum of the Civil War Soldier will celebrate its 25th anniversary in 2019. The campus offers high-tech museums and hands-on experiences. Called "the new crown jewel of Civil War History destinations in America" by Pulitzer Prize historian James McPherson, the Park has four world-class museums, four antebellum homes and is the site of the Breakthrough Battlefield of April 2, 1865, where Union forces broke through Petersburg's defense lines. Pamplin Historical Park is the vision of Robert B. Pamplin and his son, Dr. Robert B. Pamplin, Jr.

To complement your tour of Pamplin Historical Park, travel 16 miles to the east to nearby Prince George Regional Heritage Center, and then relax at The Boathouse to enjoy oysters and locally brewed oyster ale at a table overlooking the confluence of the James and Appomattox Rivers in Hopewell, Virginia. To reach a tourism advisor at the Hopewell and Prince George Virginia Visitor Welcome Center, open seven days a week, call 1-800-863-8687.

One of the stops on the Pamplin Park walking tour