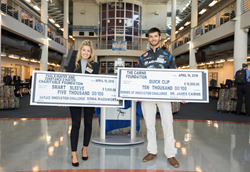 For these two students, their prizes represent needed early seed-stage funding that will allow them to move closer to bringing their ideas to market.

Stetson University students Thomas Oltorik of DeLand, Florida, and Jilissa Zoltko of Sarasota, Florida, placed first and second, respectively, in the 2018 Cairns Foundation Innovation Challenge which gives students enrolled in higher education in Volusia County an opportunity to present an entrepreneurial project idea to a panel of judges. Oltorik won the top prize of $10,000 plus one-year enrollment at the UCF Volusia County Business Incubator, and Zoltko took home $5,000 plus one-year, pre-enrollment support at the Incubator.

"I could not be more proud of Jilissa and Thomas," said William Jackson D.B.A., professor of entrepreneurship and director of the Prince Entrepreneurship Program. "Both accepted our coaching with an open mind, invested the necessary effort to be prepared both technically and mentally, and absolutely nailed their presentations."

Oltorik is a graduate student in Stetson's M.B.A. program whose winning idea, the "Quick Click," allows anglers to immediately replace a broken fishing rod guide, eliminating what is generally a timely and costly repair.

"I'm so thankful to the Cairns Foundation for this opportunity. This was a legitimate competition, with real investors asking probing and relevant questions," Oltorik said. "The Innovation Challenge moved the Quick Clip from an idea to a business reality, fueling the fire to keep me moving forward."

Zoltko, a senior majoring in business administration, presented her idea dubbed the "Smart Sleeve" which is a slim, mesh cover that can be placed around the passenger seat of an automobile and used to secure items such as laptops, drinks, etc.

"This competition was an amazing experience and gave me the opportunity to see others with such phenomenal ideas," Zoltko said. "It gave me the encouragement to move forward with my idea."

She went on to explain that at the recommendation of Jackson and Paris, she is now working with a mentor from Stetson's Entrepreneurship Advisory Board to help foster connections and to further develop her commercialization options.

"Not only does this bring tremendous credit to our students, but to the entire Stetson community," Jackson explained. "For these two students, their prizes represent needed early seed-stage funding that will allow them to move closer to bringing their ideas to market."

The Stetson participants were led by Jackson and Lou Paris, assistant director of the Prince Entrepreneurship Program in the School of Business Administration.

About Stetson University
Founded in 1883, Stetson University is the oldest private university in Central Florida, providing a transforming education in the liberal arts tradition. Stetson stresses academic excellence and community-engaged learning, and consistently earns high marks in national rankings. Stetson encourages its students to go beyond success to significance in their lives, the lives of others and their communities. Stay connected with Stetson on social media.