Paranoid Fan will use emoji maps to deploy live video streams from several Redskins watch parties across the country to enhance fan engagement and the draft experience overall. 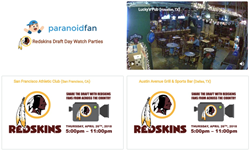 Following a successful partnership last season, the Washington Redskins and Paranoid Fan will launch a new digital offering for fans beginning with the 2018 NFL Draft in Dallas, TX. Paranoid Fan will use emoji maps to deploy live video streams from several Redskins watch parties across the country to enhance fan engagement and the draft experience overall.

During the Draft, fans will be able to access this unique video content through live camera emojis located on the Paranoid Fan maps across the Redskins digital assets. Accessing these live video streams allow for those watching to feel like part of a larger community of Redskins fans.

“At Paranoid Fan, it’s been our mission to build a global consumer mapping platform to drive mobility around live experiences. We have perfected the way fans engage others and their surroundings at live events with the use of our mapping platform. We are proud to introduce our latest mapping innovation with the Washington Redskins. Offering live streaming video capability from bars and watch parties across the country,” said Paranoid Fan CEO Agustin Gonzalez.

Starting in 2017, the Redskins integrated Paranoid Fan’s interactive stadium map in the Redskins mobile app and installed live cameras throughout FedExField to be incorporated in the map experience. This season, the Redskins plan to expand this technology to select Redskins Rally bars to live stream and get video footage from fan groups across the country.

“The Washington Redskins are dedicated to improving our fan engagement both in and out of stadium. Paranoid Fan has provided us with a platform that allows us to recognize the support of our fans nationwide and bring everyone together into a connected, digital experience,” said Jennifer Hinkle, Washington Redskins Vice President of Digital Marketing.

Over the past three months, Paranoid Fan’s venue maps have been used to drive engagement for NFL watch parties, festival experiences and more, including a partnership with the Indianapolis Colts. The idea of Paranoid Fan originated at the 2014 World Cup in Rio de Janeiro, Brazil. Paranoid Fan is a graduate of the Techstars Connection program in New York City and received seed funding from Techstars and ZX Ventures, the venture capital arm of AB InBev.

Paranoid Fan, based in Dallas, Texas, is a social mapping app that helps fans navigate their game day experiences. The Paranoid Fan mapping ecosystem helps users discover what is happening around their location, while also allowing them to populate content with their own personal experiences