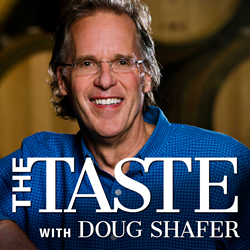 Doug Shafer, president of Napa Valley winery Shafer Vineyards, hosts a new podcast "The Taste with Doug Shafer" featuring the stories of fascinating people in the world of food and wine

"I’m interested in people’s stories – where they started, their struggles, successes, and how they ended up where they’ve ended up,” says Doug Shafer.

The podcast launches with three episodes featuring entertaining, informal conversations with James Beard Award-winning chef Cindy Pawlcyn whose background includes launching Mustards, Fog City Diner, Tra Vigne, Cindy’s Backstreet Kitchen, and more; vintner John Skupny who worked with Francis Ford Coppola of Inglenook, Bernard Portet of Clos Du Val, and Charlie and Chuck Wagner of Caymus before he and his wife Tracey launched their own winery Lang & Reed; and Leslie Sbrocco, known to millions for her fast-paced wine segments on The Today Show, her PBS show Check Please, Bay Area, her new web series Taste This and books such as Wine for Women.

Episodes with vintner Pete Seghesio of Journeyman and San Lorenzo wines and Journeyman Meat Co. and vintner Marc Mondavi of Charles Krug and CK Mondavi will be released in the coming weeks. Additional guests are being scheduled and will be announced.

“Mainly, I’m interested in people’s stories – where they started, their struggles, successes, and how they ended up where they’ve ended up,” says Doug Shafer.

At the age of 17, Doug Shafer moved with his family from Chicago to Napa Valley in January, 1973. Today he is president of his family winery, Shafer Vineyards, and has spent some 40 years in the world of food and wine. Shafer’s acclaimed 2012 memoir, A Vineyard in Napa, covers both the history of the last 40 years in Napa Valley as well as his winery’s ups and downs.

“Over the years I’ve heard so many amazing stories from people I’ve worked with or befriended – funny, inspiring, and even heartbreaking. I see podcasting as a way to share these stories and the lives of these great people with an audience who finds these stories as compelling as I do,” says Shafer.

“The Taste with Doug Shafer” is available now in iTunes, Soundcloud, Stitcher, and GooglePlay, and on the Shafer Vineyards website: http://shafervineyards.com/podcast/index.php.