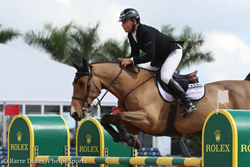 "We couldn't be more pleased to welcome Sharn as the newest member of the American Equus family," said David Shano, Founder and CEO of American Equus. "He is a highly-respected and successful athlete around the globe and we are so excited to be part an integral part of his program."

American Equus, the popular designer and manufacturer of premium stirrups, spurs, and horse shoes is proud to announce its newest partnership with leading Grand Prix showjumping rider, Sharn Wordley. Wordley adds an incredible amount of depth and international experience to the Chosen Rider team boasted by the company that makes products that are both technically advanced as well as luxuriously beautiful.

"We couldn't be more pleased to welcome Sharn as the newest member of the American Equus family," said David Shano, Founder and CEO of American Equus. "He is a highly-respected and successful athlete around the globe and we are so excited to be part an integral part of his program."

Originally from New Zealand, Sharn Wordley moved to the United States in 2004 to further advance his competitive show-jumping career. Wordley is ranked within the top 100 on the FEI Longines List and boasts an impressive international resume, including a place on New Zealand's 2008 Beijing Summer Olympics team and competing on multiple Nation's Cup teams for his home country. Wordley has competed in 22 countries around the globe, boasting countless grand prix wins, and has successfully ridden in some of the world's most prestigious shows, including CSIO5* Rome, CSIO5* Lummen, and CSIO 5* Hickstead among others.

Outside of his riding achievements, Wordley has trained numerous successful riders, some of whom have competed in the Olympics, World Cup Finals, World Championships, and the Pan American Games. In 2008, Wordley and fellow New Zealander Craig Martin founded Wordley Martin Premium Equestrian Services, a premier arena architecture and footing company, and have since grown to be hailed as one of the top arena builders in the country.

"I am really excited to work with American Equus," Wordley enthused. "These products have proven to me that they are functionally superior to other products on the market that I have tried. The stirrups also enable me to be as balanced and effective in my riding as possible, which is really important when I am competing over large tracks in the Grand Prix ring. I look forward to supporting the growth of this company internationally and appreciate their partnership."

After a successful winter at the Winter Equestrian Festival, Wordley plans to compete in North America this summer, in preparation for the 2018 World Equestrian Games; being held in Tryon, North Carolina. While making stops in Kentucky and Spruce Meadows, Worldley can be seen riding in his custom Elite stirrups. The Elite design helps the keep the riders leg positioned correctly around the horses barrel, while encouraging the rider to keep their heels down and providing the perfect amount of sole support for secure and comfortable ride.

Based in Gilbert, Arizona, American Equus produces stirrups and spurs out of lightweight and durable aluminum alloy. Completely customizable, with hand-polished finishes, American Equus products are the perfect mixture of equestrian tradition and 21st century production technology, design and function. The company designs and manufactures equipment suitable for all equestrian disciplines including hunter/jumper, dressage, polo, western and racing. American Equus is also currently the only company to produce stirrups and spurs completely in the United States.